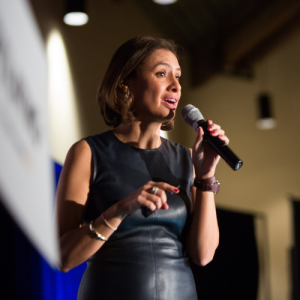 As an Emmy nominated political and voting rights activist, María Teresa Kumar has dedicated her career to advocating for inclusive political participation. She co-founded a national non-profit organization with actress Rosario Dawson called Voto Latino, that uses media and technology to encourage younger generations of Latinx voters. Under her leadership, Voto Latino has registered over a quarter million voters and was a founding partner of National Voter Registration Day, the largest one-day effort towards voter registration.

María Teresa Kumar was born in 1974 in Bogota, Colombia. Kumar moved to the United States when she was very young, and grew up in Sonoma County, California. However, she spent most of her summers back in Columbia. Early on, Kumar recognized her love for political activism. When she was 12 years old, she attended a class trip to Washington, D.C. and experienced first-hand the political activity in the nation’s capital. Kumar’s experience, coupled with her passion for advocacy within the Latinx community, led Kumar to pursue a degree in International Relations. She decided to attend the University of California, Davis where she received a Bachelor of Arts degree. After graduation, Kumar immediately took a job as a legislative aide for California congressman and Democratic Caucus Chair Vic Fazio, in the U.S. House of Representatives. After working with congressman Fazio, Kumar decided to continue her education, and she subsequently earned a Master’s degree in Public Policy from the John F. Kennedy School of Government at Harvard University.

Upon finishing graduate school, Kumar began to use her education and experience to better her community. She soon realized the way technology plays a pivotal role in effective political activism and community organizing. For this reason, in 2004 Kumar co-founded a grassroots political organization with actress Rosario Dawson called Voto Latino. Their organization was designed to encourage and empower younger generations of Latinx voters and advocate for inclusive political participation. Using media and technology as a central tool, Voto Latino creates innovative digital campaigns and programming to increase voter registration and civic engagement in Latinx communities. Kumar has served as the President and CEO of the organization since its inception, with the ultimate goal of “franchising as many people as possible to make sure we have a healthy, robust and transparent democracy.”[1] Through her organization, Voto Latino has registered over a quarter million Latinx voters and aim to hit the one million mark by the 2020 general election. In addition to her co-founder Rosario Dawson, Kumar has partnered with influencers including America Ferrera and Wilmer Valderrama to lead national campaigns. Some of their campaigns include; an online educational curriculum, an iTunes album, the first bilingual app, and a telenovela miniseries about voter registration that received over two million views on YouTube. Voto Latino was also a founding partner of National Voter Registration Day, which is the largest one-day campaign for voter registration.

In addition to voter registration, Kumar is committed to advocacy within the Latinx community. In 2010, Voto Latino partnered with the U.S. Census Bureau to encourage higher rates of participation in the census to ensure adequate government funds would be allocated to education, healthcare, and infrastructure in Latinx communities. That same year, Kumar helped to create the first televised English-language town hall to discuss the role of the Latinx community in U.S. society and politics called “Beyond Borderlines.” This two-hour special on MSNBC was hosted by Kumar and earned her an Emmy nomination for Outstanding News Discussion and Analysis. In 2014, Kumar launched the VL Innovators Challenge which granted up to $500,000 to technological projects that proposed innovative ways to help the Latinx community. Her work has earned her countless honors and awards including several Promax Gold and Webby awards, being named one of Elle Magazine’s 10 Most Influential Women in Washington D.C., and Fast Company’s 100 Creative Minds in Business. Kumar is also a recognized media commentator, speaker, and writer for national publications, and her work has been profiled on HBO’s Celebrity Habla and PBS’s Undergraduates. Additionally, Kumar serves on the boards of the Latino Leaders Network, Planned Parenthood Federation of America, and EMILY’s List.

Kumar currently lives in Washington, D.C. with her husband Raj Kumar and their two children Lucia Mercedes and Eduardo.