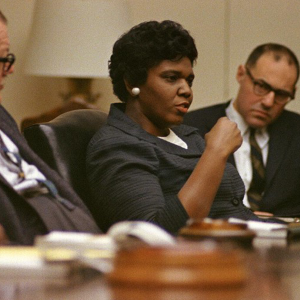 While the world watched during the Impeachment hearings of President Richard Nixon, Barbara Jordan boldly took center stage. As a lawyer, a congresswoman, and a scholar, Jordan used her public speaking skills to fight for civil and human rights. In 1972, Jordan became the first African American woman to be elected to Congress from the South since 1898.

Barbara Charline Jordan was born on February 21, 1936 in Houston, Texas. The daughter of Arlyne and Benjamin Jordan, Barbara was the youngest of three children. Her mother was a public speaker and her father was the pastor of Good Hope Missionary Baptist Church. After attending Roberson Elementary School, Jordan attended Phyllis Wheatley High School and graduated in 1952. Upon graduation, she went to Texas Southern University and earned her bachelor’s degree in 1956. She then went to Boston University to get her law degree. Once she passed her law exam called the “bar,” Jordan began practicing law in Houston Texas. For her first job, she worked as an administrative assistant for a county judge. That same year, she began working on the John F. Kennedy presidential campaign.

In 1962, Jordan began her political career and ran for the Texas House of Representatives. Although she lost the race, she ran again in 1964. However, she lost again so in 1966 she decided to run for the Texas Senate instead. This time, Jordan won and became the first African American woman ever elected to that office. Also, she was the first African American state senator in United States since 1883. During her time as senator she worked to establish a minimum wage law, antidiscrimination statements in business contracts, and a Fair Employment Practices Commission. She was elected president of the Texas Senate on March 28, 1972, making her the first black woman in America to oversee a legislative body. During this time, Jordan was also running for Congress. Winning by 81 percent, she became the first African American in the 20th century to be elected to Congress from the South.

While in Washington, D.C. as a congresswoman, Jordan served on various committees. Starting in 1975, she served three terms on the Judiciary Committee. Jordan quickly became a prominent voice on the Judiciary Committee. As the committee began the impeachment process against President Richard M. Nixon, Jordan gave the opening remarks. In her speech, she stated her reasons for supporting President Nixon’s impeachment and her faith in the Constitution. After her powerful speech, many people surrounded her car, and sent her letters and phone calls to congratulate her. President Nixon resigned from office on August 9, 1974. Following this, Jordan continued to advocate for civil rights protections for many Americans. In 1975, she sponsored legislation that expanded the Voting Rights Act of 1965 to include Latinx, Native, and Asian Americans. A year later, she became the first African American and the first woman keynote speaker at the Democratic National Convention.

Jordan continued her political career and began heavily campaigning for Democratic presidential candidate James Earl (Jimmy) Carter. In 1977, Carter won the presidential election against President Gerald Ford. During his term, President Carter interviewed Jordan for the Cabinet position of U.S. Attorney General, but he did not offer her the position. The next year, Jordan decided not to run for re-election to Congress. Instead, Jordan became a professor at the University of Texas in Austin as the Lyndon Johnson Chair in National Policy. She taught in the LBJ School of Public Affairs at the University until the early 1990s. In 1992, she delivered the keynote speech at the Democratic National Convention from a wheelchair because she suffered from multiple sclerosis. Two years later, President Bill Clinton selected her to lead the Commission on Immigration Reform. However, Jordan’s health continued to decline. Although she was very quiet about her private life, many historians suggest that her caregiver Nancy Earl, was also her life partner. Earl was an educational psychologist that traveled with Jordan for nearly thirty years. On January 17, 1996, Barbara Jordan died from pneumonia, a complication of leukemia.