A Heritage of Mixed Messages

Nineteenth century America idealized white woman’s modesty, frowning on sports as a threat to elite females’ fertility. This double standard persisted long after slavery was abolished: elite women did not exert themselves; their (female) servants did. Yet there were few sporting outlets for poor women who had athletic gifts and aspirations. Instead, the elite women’s colleges and the country clubs associated with the wealth and leisure of the Gilded Age made certain sports acceptable for aristocratic ladies: tennis, croquet, archery, and bathing-beauty swimming at racially restricted lakes or beaches.

In Coming on Strong, historian Susan Cahn notes that these endeavors were also more socially acceptable because they required elaborate outfits, stamping an assurance of femininity onto competitors in costume. Healthful beauty, not aggression or the personal/political desire to triumph over competitors, remained the watchword for active women–with the interesting exception of field hockey, an often bruising sport legitimized as girlish because of its association with boarding schools for daughters of the elite. 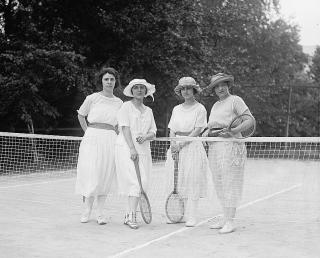 Medical authorities dating back to Aristotle declared that women were basically ruled by their reproductive systems, with a limited amount of “energy” flowing through the body that monthly hormonal expenditure used up in dangerous quantities to begin with. Too much study or, heaven forbid, bicycle riding and other unladylike sports would render nice women infertile; nineteenth-century campaigns against higher education for women sounded very much like campaigns to prevent women from taking part in active sports.

Anti-college campaigns also had clear racial and class overtones: women who graduated from the Seven Sisters colleges were indeed less likely to reproduce, but this had more to do with the lure of professional service careers [such as teaching and nursing] which required women to remain unmarried. Still, the popular connection between higher education and spinsterhood led to notions that learning, like sport, “desexed” women; even President Theodore Roosevelt [not incidentally an advocate of sports and warfare-based manliness] believed that America’s oldest white families were conspiring to commit “race suicide” by sending their next generation of daughters to college.

As nineteenth-century America honed white masculinity through warfare and capitalism, baseball and basketball, it also restricted women’s competition in public spheres of sports and politics by retaining inconsistent ideals about females’ innate ability to endure pain, injury, and manual labor. In textile mills and factories, women and children worked unregulated hours in life-threatening conditions; the sacred role of “mother” was violated every time a female slave suffered the sale of her children for someone else’s profit; in 1885 the “age of consent” for a girl child to be pushed into sexual union with an adult male was ten years old in 36 states, and seven years old in Delaware. It was legally permissible for any man to beat his wife and kids. Clearly, socially sanctioned ideals of protecting women and children from harm have always had some gaps.

Most women had to be tough to survive–to survive as mothers, child brides, farm wives, sharecroppers, factory girls, millhands, pioneers. But where physical endurance was a highly sought-after quality in farmwives, strength on the home front was separate from an athletic identity. No one denied the muscular effort involved in carrying a child and giving birth; it was public athletic performance by women and girls that was condemned as immodest, selfish, and attention-seeking, the trinity of bad-girl behaviors. And athletic risks undertaken in prime childbearing years were seen as foolhardy. 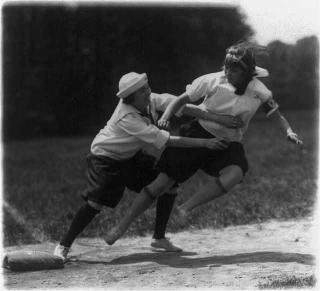 Virginia Smoot tagged out at third by Mabel Harvey during the ball game.

Physical stress was common for rural homemakers who ran a household or family farm with few labor-saving devices or hired hands. Their daily workload rivaled the bricklaying or haybaling assigned to the strongest men; but rural and small-town wives rarely had their femininity impugned, as long as their “athletic” chores entailed proper domestic duties: scrubbing floors, wringing laundry, ironing, lifting children, tending animals, hauling water, gardening, canning, even splitting wood and dressing freshly slaughtered game. From this Midwestern demographic of bulging female arm muscles came the first female softball players and, ultimately, the All-American Girls Baseball League of World War II. Our collective national memory is slowly erasing images of those American women, black and white, who grew up farming or going out to work at age six. (My grandmother Mia could split an apple in two with her bare hands, a casual act of kitchen athletic power that delighted me as a kid.)

Who were the first female athletes embraced by Americans? What allowed them to break through restrictive cautions and conditions? When the modern Olympics were brought back in 1896, women were not allowed to compete until 1920 (with a special "Women's Olympics" convening in 1922 and well into the 1930s.)

Scholar Susan Cahn suggests that country club sports like tennis and swimming, with their leisure-class and feminine-fashion associations, allowed white heroines like Helen Wills and Gertrude Ederle to capitalize on the flapper era’s love affair with sophisticated outdoorswomen: “They helped fashion a new ideal of womanhood by modeling an athletic, energetic femininity with an undertone of explicit, joyful sexuality.”

With American racism at extraordinary levels–despite the Harlem Renaissance, the 1920s saw the century’s highest levels of Ku Klux Klan membership, with ongoing lynchings–few if any tennis courts or park pools were open to black athletes, male or female. Thus as white swimmers brought home Olympic gold, and white tennis beauty queens made headlines, African-American “race girls” brought pride to their own communities by defeating white teams at track and basketball meets. This pattern of white celebrity athletes vs. grassroots local heroines heralded only by their own [minority] communities remained in place for decades, further obscuring how many women and girls were, in fact, committed to sports. 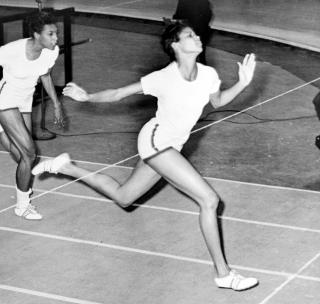 Wilma Rudolph at the finish line during 50 yard dash track meet in Madison Square Garden in 1961.

The association of sport with “rough” girls also continued through the Depression and the 1940s, due to industrial factory softball leagues and the segregated track world of black female athletes. But after the U.S. entry into World War II, gender codes changed to permit and reward muscular competence in war factories’ “Rosie the Riveter” workers (and WAC recruits.) Wartime America embraced an unlikely symbol of victory: the All-American Girls Professional Baseball League.

Though all-white, and requiring strict obedience to absurd standards of femininity in dress, curfews and hairstyles, the League is now praised as radical for its day. Penny Marshall’s 1992 blockbuster “A League of Their Own” and Janis Taylor’s less famous but more authentic documentary “When Diamonds Were A Girl’s Best Friend” make plain the League’s selling point, conceived by Chicago Cubs owner Philip K. Wrigley–that his “girls” would play like men but look like ladies. The contrast, and the presentation of strong-armed women as a wartime emergency resource not unlike the Navy’s WAVES, made escapist entertainment profitable. Since the League continued until 1954–an eleven-year run–it would be inaccurate to say it ended soon after the men returned from war and women were urged out of factories and ballparks and back to the home. But that social shift certainly influenced the League’s postwar wane, along with other factors such as boys-only Little League, the advent of television, and Cold War dramatization of American femininity vs. Soviet women’s mannishness in the 1950s Olympics.

I regularly bring in my parents’ high school yearbooks from Fairfax and Los Angeles High of the mid-1950s; while my parents’ soon-to-be celebrity classmates Dustin Hoffman and Jack Kemp were lettering in track and football, respectively, girls had exactly two choices: join the Neptunettes [be like Esther Williams!] or the Bowlerinas [and meet boys at the malt shop later!]. Most importantly, the 1950s introduced television, which would soon broadcast ballgames, sports-themed commercials, and images of a race and gender-stratified America no patriot of the McCarthy era was supposed to question. Television made possible a national rejoicing in U.S. sports heroes once only glimpsed in movie shorts (or at actual games).

This rapid-fire social history of attitudes towards women’s domestic duties and reproductive health in the years before Title IX are a must for my students–many of whom had no idea that, for instance, ballparks and beaches–the very waves of America’s oceanfronts–were off-limits to black men and women, or that as late as 1967 Boston Marathon officials could declare all women physiologically incapable of running 26 miles. What I teach in my sports history class is how national history shapes physical standards for us all.

In such countless ways, America wasted its real athletic potential. And then, in 1972, buoyed by the successes of the civil rights and feminist movements and political mandates to end segregation, women stepped up to the plate. And Title IX became law.

I am delighted to offer this sample mini-lecture from my women’s sports history class, which I’ve taught every year at both Georgetown and George Washington University since 1996.

Dr. Morris has written 13 books on a variety of women’s history topics, more information about her and her work can be found here: http://www.bonniejmorris.com.

Originally published in A Different Point of View Winter 2012.

Alice Coachman was the first Black woman from any country to win an Olympic gold medal.
READ MORE
Biography

An early star of the WNBA and a four-time Olympic gold medalist, Lisa Leslie is one of the greatest basketball players of all time.
READ MORE
.