Sandra Weber of Elizabethtown, New York, has authored ten books and several magazine articles about history, women, and the Adirondack Mountains region. In addition to her writings, Sandra is also well-known for her dramatic portrayals of Adirondack women such as Mary Brown, Inez Milholland, Jeanne Robert Foster, Kate Field, and Martha Reben.

Program Assistant, Kenna Howat, interviewed Weber about her experience with and writings of adventuring outdoors.

Why do you think it is important for women to spend time outdoors?

In your book Two in the Wilderness you went on a long hiking trip with your daughter. Why did you decide to do that? 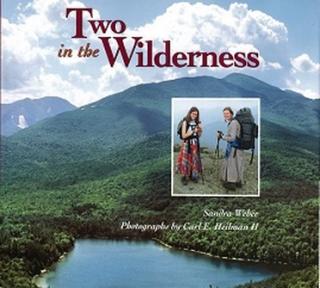 Well, I had been hiking a lot of the Adirondack high peaks and mostly doing that with my husband and two young daughters. But I realized that when we would go backpacking, my husband would generally use the stove, carry more of the gear, erect the tent, etc. I think that sometimes when a man is around we just tend to let them fall into that role. I realized that I really wanted to prove to myself, and to demonstrate to my daughters, that women are capable of handling the outdoors life. So I decided to force myself to take over that role and prove that I could be self-reliant, and so could my 11-year-old daughter. Also, I really wanted an opportunity for just the two of us to be alone, hopefully to bond but at least to see what would develop as we experienced this 11-day backpacking adventure together.

How did your daughter feel about the whole trip?

She was kind of excited about it at first, partly because she knew we would be writing the book about it. But when the day came to actually start the trip, she was uncertain. In her first journal entry, she wrote:

My name is Marcy and I am 11-years-old. This is my journal for a hiking trip I am taking with my mother. We will walk 60 or 70 miles and be gone for almost two weeks. I know I will miss my friends and my cat. Mom really wants me to go on this trip. She thinks it will be fun. I think this trip is going to be annoying and boring.

So that’s how she felt when we set out but along the way she began to have a really wonderful time. And I think she proved to herself how strong and how independent she was. She even did some solo canoeing and kayaking. By the end she wrote a little poem in her journal about not wanting to go back to town. She liked being out in the woods and having the freedom to just roam and explore wherever she wanted.

What obstacles did women historically face in adventuring outdoors?

Oh, so many! It begins with the clothing. I mean, imagine trying to hike or bicycle in a corset and a long dress and other encumbrances; it’s just impossible. Or even riding horses, because you were told you had to ride side saddle. So one of the first things women had to combat was fashion; they had to change what was acceptable for women to wear.

They also faced the prejudice of society—the idea that a woman should be meek, a woman should be mild, a woman shouldn’t do anything to get excited or anything that requires her to use her muscles. Women had to break away from that idea and prove that physical exercise wasn’t going to harm them. There is a famous quote about if a woman rides a bicycle it’s somehow going to affect her health and she’s not going to be able to have babies. There was a lot of that kind of thought around in those days. In the Adirondacks, women who tried to go out hiking, camping, or boating were called maniacs by proper society ladies.

You hike in period clothing occasionally, don’t you? 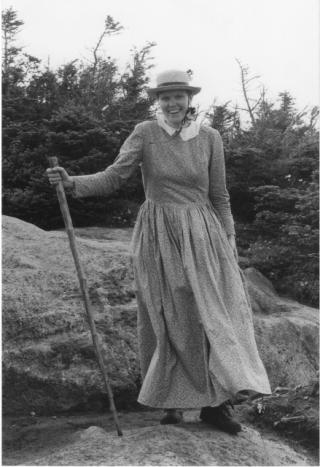 I do. I started writing a book about Mount Marcy, the tallest mountain in New York State at 5,344 feet, which isn’t enormous compared to other mountain ranges, but for out here it’s pretty tall. I was writing all about the history and as part of that I did a lot of research about the first women who climbed it, which no one had really investigated before. I found myself wondering "Well, what was it really like for them to climb in their long dresses and all of this kind of thing?" So I sewed a long dress and I climbed Mount Marcy in it. It wasn’t too cumbersome; I kind of enjoyed it, actually. I had read how they had pinned up their dresses a little bit when they were going up hills so they wouldn’t trip on the front of the dress. I did that and I found it to be very helpful. I did, however, wear modern boots because I have knee problems. I can’t imagine doing it in the kind of shoes that they wore.

I have climbed six or seven times in different long-skirted outfits. So when I took the trip with my daughter she said, “Mom, when we go over Mount Marcy can I wear a long dress too?” I said, “okay” and I found a long skirt to fit Marcy. So we both climbed over Mount Marcy in our long dresses in the rain. We passed a ranger that day who looked at us in bewilderment and asked, “What are you doing?" 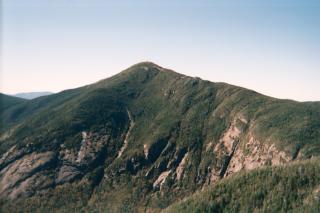 What are some lessons modern American women can learn from those who adventured before them?

I’ve also studied the women suffrage movement, and, of course, we can learn from their strategies of organizing, of publically protesting, being out in the streets. Not always yelling or shouting but sometimes just being silent sentinels, just standing on the sidewalk holding up a sign. But they never gave up; they stood day after day after day no matter whether it was raining or snowing. I think their persistence is quite inspirational. Even though there were so many against them, they knew that they were fighting for something that was worth fighting for and that eventually they would inspire others to realize that. Many times, these women had nothing to rely on but their own spirit. That spirit—I think it comes from self-reliance and from confidence in their cause.

What do you want women to know from reading your books?

I want women to know that there were women out there being active outdoors and doing things that were unconventional at the time—whether picketing or pedaling. That doesn’t tend to get written about very much. Ten or fifteen years ago there just weren’t very many stories about the women in history, what they were doing, what they were accomplishing. Part of what I’m doing is trying to recover that history and let it be known what these women were doing and what they struggled against. I hope to inspire women today to not be afraid to do things that are unconventional, not be afraid to look weird or crazy because you want to do something that you feel is important. I hope they don’t take no for an answer, that women go ahead and try things, experiment.

I love to see young girls get outdoors and embrace their curiosity about nature. I also admire women in their seventies, eighties, and even nineties who are still hiking and canoeing. I think it is fantastic to see women of all ages experiencing the out-of-doors.

Books by Sandra Weber. Available for purchase at www.sandraweber.com

Two in the Wilderness: Adventures of a Mother and Daughter in the Adirondack Mountains (Photos by Carl Heilman)

Harlem Renaissance poet Anne Spencer lived her entire life in Virginia, where she tended her garden, worked as a librarian and teacher, hosted luminaries of Black intellectual and cultural life, and fought for equal rights for African Americans.
READ MORE
.