Mountains Have No Ceilings

What Sports Can Teach Us About Women’s Leadership 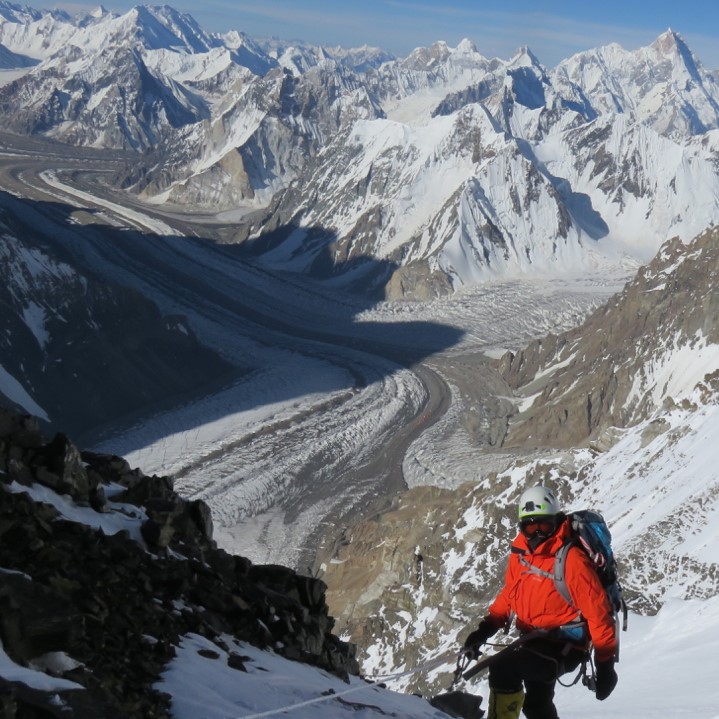 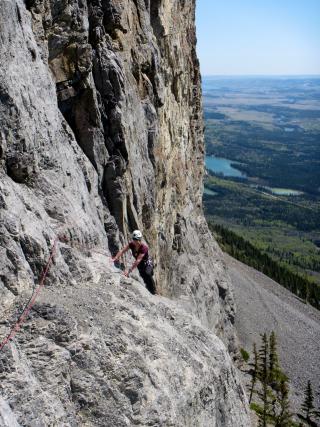 Despite working over 20 years as a business executive in industries as diverse as power generation to financial services, not one of these businesses was led by a female CEO. Women were there, just not at the top. They were there in key support roles as managing directors, heads of departments, divisions, or business units. As time went on, women increasingly took on more challenging roles, i.e., roles that had profit and loss responsibility. Success in these roles would prove women would be ready for the CEO position.

What made women exceptional from my point of view was the way they communicated. Women’s communication styles are naturally collaborative and nurturing. They are able to bring people together, making teams stronger. In a recent Deloitte survey of 7,000-plus businesses, the number-one goal was to design a network of teams and remove organizational matrixes to meet the demands of a changing business climate. A network of teams requires more focus on communication, not less. Which is where women really excel.

Women’s communications styles also help with diversity as many of today’s teams include different styles across multiple cultures. Younger generations prefer two-way communications and transparency, especially when something goes wrong. Women are more likely to admit mistakes, as they don’t feel the need to apportion blame, which allow teams to learn from their mistakes and recover faster. 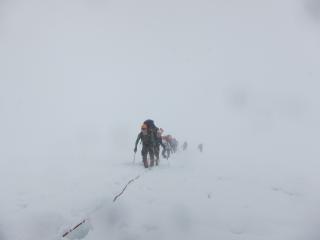 I took a short career break during the recession to find what’s next. I knew I couldn’t sit around, so I started walking which led to climbing. Not corporate ladders this time, but literally climbing. I went on to climb big hills and then even bigger mountains. Today, I am the first American woman to summit K2; the first to receive a Guinness World Record for summiting the highest peak on every continent, including Everest in 295 days; and one of eight women to have skied the last degree to the North and South Poles.

2017 was a great year for women—the number of female Fortune 500 CEO’s reached an all-time high at 32. It was also the year I summited K2, the second tallest and arguably one of the hardest mountains to climb, where one out of every four who summits, dies. This year, 2018, has not been such a great year for women. Female Fortune 500 CEO’s fell to 24, a one year decline of 25%.

O'Brien climbing Broad Peak with K2 in the background.

Do women act differently on mountains? There are not many female leaders in mountaineering, but I have some examples. I had a female guide on Mt. Rainer and almost immediately I could tell her style apart from her male peers. As our mixed group of nine climbers settled into high camp, she invited all of us to the mess tent for a chat. She quickly told us the bad news first—that we were moving too slowly to make the summit the next day. Using her open and transparent communications style, she said the team had a choice to make. Either all of us try to climb up as far as we could before turning around as a team, or some of us could self-select out now and let others try for the summit the next day.

It is interesting for someone to put a question like that to a team. She didn’t tell anyone whether they were fast or slow—nor did she say who should or shouldn’t self-select in or out. Perhaps she didn’t need to because it was obvious who was who by what time each person arrived at each camp. It was, however, up to each person to be honest with himself or herself. If this had been a male guide, he would have said that the team was moving too slow and John, Mike, and Sam (if these were the fastest climbers) will go to the summit the next day while the rest of the team will head down. The male guide would have used command and control to make the decision and instruct the team what was going to happen next, without explanation, and that was that.

A great deal of high altitude mountaineering involves hiking. Sometimes just the approach to the base of a mountain can be 60 miles and take six to eight days. Let’s say you want to climb Everest—even after you reach base camp, there is still another six to eight weeks of acclimatization hikes up and down the mountain until you have built the red blood cells necessary to survive the lower atmospheric pressure found at the higher camps. There is no benefit to men or women in this thinning altitude—both are at risk. Likewise, if technical pitches of rock, ice, or snow are encountered, a climber relies on leg strength more than upper body strength, so again, no benefit to either men or women. However, because expeditions take six to eight weeks, a considerable length of time, there is an advantage to women. 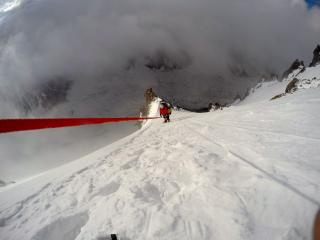 O'Brien and Kami Sherpa climbing K2 with views of the Godwin-Austen glacier below.

I’ll call this a time advantage, and I give it to women because it has everything to do with the mind and mental toughness. It involves her ability to quiet the mind and stay focused. This observation is based only on my long-term expeditions, but I have found that men prefer entertainment and often need things to do, whereas women can just switch off. The ability to switch off is important because the mountain provides an enormous amount of down time along with extreme uncertainty, especially with the weather. Women can handle both the downtime and the uncertainty, evoking what seems like an endless amount of patience. Women don’t fill empty spaces with stuff that doesn’t belong there, like fear.

Here’s an example of what men and women do after a hard day’s climb. A man goes to his tent to eat, write in his journal, look at photographs, pick his toes, etc. A woman goes to her tent to clean her face, clean her body with wet wipes, change her clothes, and hang wet clothes to dry, make something to drink, etc. She begins the process of unwinding and de-stressing. He is going to run out of things to do (or battery power) quickly, while she hasn’t even started on entertainment.

I met another incredible woman expedition leader while attempting K2 my second season in Pakistan. I was the only other women expedition leader and my team was busy trying to stir the pot. “You’re going to hate her, she’s really loud and obnoxious.  Plus, she’s got a streak of pink hair. And wait until you she her moustache!” 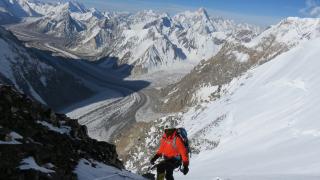 O'Brien climbing K2 with views of the Karakoram below.

It’s amazing how people wait in anticipation for women to clash like a Game of Thrones. The first time I actually sat across from her—me wearing a pink wicking shirt and lime green pullover; her wearing a fire engine red base layer under a canary down jacket—I can’t say we didn’t clash. The colors designated for mountaineers are those designed to find us in avalanches, not win beauty contests. Nevertheless, it was Eid al-Fitr, so we happily joined our Pakistani friends to break their fast at the end of Ramadan at K2 base camp. She sat at the opposite end of the mess tent and I observed her laughing and having a good time. When I caught up with her privately the next day, full admiration replaced all voids as shared stories of travel were exchanged between us and we counted our six degrees of separation. As our new friendship formed, it was about to be put to a real test.

Four days later, an avalanche of great magnitude wiped away all equipment, tents, oxygen and supplies all expeditions has stored at Camp 3, located 24,100-feet-high on K2. As teams heard the news they turned around and quickly headed back down to K2 base camp. Luckily there were no casualties, but teams were still shaken and generally upset. A question loomed whether some expeditions would continue to try for another summit bid. The larger expeditions, which experienced a greater economic loss in the avalanche, made the first decision to leave immediately. She and I, on the other hand, had smaller teams and less of a loss, so we were not sure the decision to leave was the right one.

The next morning we went back to our respective drawing boards. As a guide, she began analyzing pictures of the snow pack at Camp 3, concluding that the avalanche was not necessarily new, it was just recently discovered when the team arrived at Camp 3. As a former executive, I put my head down and began analyzing previous K2 summits dating back to 1954, grouping these first by day of summit, then lining up actual weather by day as well as forecasted weather to find that 68% of all summits were still ahead of us. 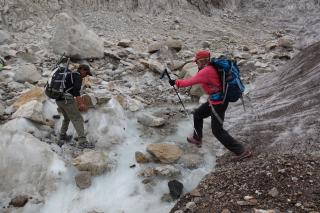 O'Brien jumping over a glacial stream with Kami Sherpa during their 100-km trek to K2 Base Camp.

An enormous smile stretched across his face, and I swear I saw a twinkle in his eyes. I watched him as his head began to nod up and down in that knowing way. Because all three of us knew that the founder of Pakistan, Muhammad Ali Jinnah, had famously said “there are two powers in the world; one is the sword and the other is the pen. (But) there is a third power stronger than both, that of the woman.”

Today, when I reflect back to that time and I think of sports, I can recall only two sports that men and women actually compete head-to-head: auto racing and equestrian sports. Ignoring sailing, which has mixed teams of men and women, the rest are split or at least scored along gender lines. Mountaineering is scored along gender lines and recorded individually. If there is anything I’ve learned during my time outdoors, it is this—Mountains Have No Ceilings. Reinhold Messner, an Italian mountaineer famous for climbing the 14 tallest peaks without oxygen, said, “Mountains aren’t fair or unfair, they’re just dangerous,” reminding us that it doesn’t matter if you are young or old, rich or poor, male or female. The only thing that matters is that you know how to climb, are reasonably fit, and have a bit of luck.

I believe women have a bit of luck, which comes in two forms. The first is their open and transparent communications style that helps them get where they need to go. The second is their mental focus that helps them stay the course when the going gets tough; and the going always gets tough. That’s quite simply, our secret.

Imagine being the first woman to win an Olympic event for the United States, but never knowing that you had done so. This is what happened to Margaret Ives Abbott.
READ MORE
Article

Alice Wong is the founder and director of the Disability Visibility Project, an online community that fosters and amplifies disability media and culture.
READ MORE
.