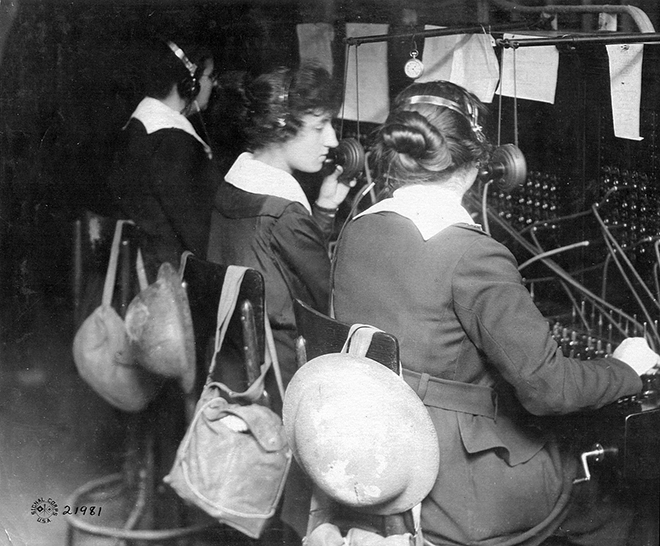 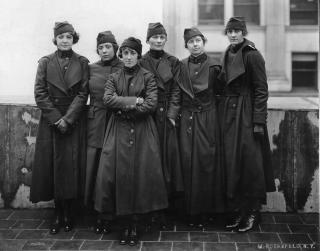 The Hello Girls drill on the rooftop of ATT in New York in their final training en route to France in 1918. Grace Banker stands second from the right.

American women were soldiers before they were voters. The history of women’s suffrage often focuses on activists in Washington. We also need to look at the battlefields of France.

Susan B. Anthony, Carrie Chapman Catt, Alice Paul, and countless others created a groundswell for change, but World War One was the specific catalyst for the triumph of suffrage worldwide. Foreign events sped domestic campaigns that had floundered for seventy years.

The conflict that began in 1914 altered expectations about citizenship globally. Not only did the Russian, Ottoman, and German Empires fragment into a dozen new nations, but cracks also ran under the British, French, and Dutch Empires as diverse peoples claimed a right to popular sovereignty. Within older democracies, groups who never had much voice raised theirs with new conviction.

Women, in particular, leveraged the conflict. Not surprisingly, the nation latest to the war was also late to the vote. Austria, Canada, Germany, Great Britain, Russia, and fifteen other countries enfranchised females before America. Accustomed to congratulating itself as the vanguard of liberal democracy, the United States brought up the rear.

When President Woodrow Wilson finally endorsed the cause, he told the U.S. Senate that the vote was vital to the “realization of the objects for which the war is being fought.” He hoped America might organize an enduring democratic peace. But how could the United States lead the free world if it was behind everyone else?

Other countries had already expanded the franchise. “Are we alone to refuse to learn the lesson?” the president asked the recalcitrant Senate in October 1918. Most peoples had accepted a new interpretation of democracy. “We must either conform or . . . resign the leadership of liberal minds to others.”

Wilson praised women who had done their simple duty, some “upon the very skirts and edges of the battle itself.” They had served everywhere. “Are we alone to ask and take the utmost women can give—service and sacrifice of every kind—and still say that we do not see what title that gives them?” the president asked.1

America’s first female soldiers belonged to a compact branch of the army known as the Signal Corps. (Women also joined the Navy and Marines for the first time, working at home.) Stationed throughout shell-shocked France, they did not fire cannons, sink submarines, or wield bayonets. Their job was to send messages. In March 1918, Stars and Stripes hailed the women who arrived during Germany’s bombardment of Paris as “Bilingual Wire Experts.”2

Army nurses also served in uniform. Yet theirs was an altruistic occupation designed to alleviate the ravages of battle, not advance military objectives per se. The Signal Corps operators helped the United States win its war. They were soldiers, not angels.

Technology set the course, propelling change in an unexpected direction. In May 1917, the month after Congress declared war, General John Pershing sailed for France on a ship stuffed with equipment. Nicknamed “Black Jack” for having commanded an African-American regiment on the frontier in the 1890s, Pershing made sure to carry not only standard gear, but also the newest devices. 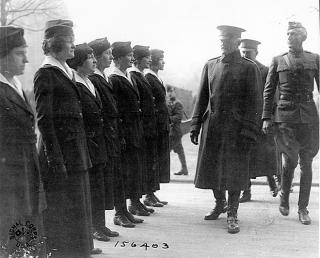 Military tackle had undergone a revolution since the last Indian wars only two decades earlier, when Black Jack rode with the Buffalo Soldiers of the Tenth Cavalry. Planes had replaced horses. Trucks had overtaken mule trains. Telephone wires had outrun semaphore flags and smoke signals.

Telephones were then the only major military technology in which America enjoyed superiority. Invented in the United States, they reached farther, conveyed more messages, and reproduced sound with greater fidelity than anywhere else. When the British commanding officer in World War I used an American-built line, he exclaimed, “Would you believe it? They actually recognized my voice in London before I told them who I was!”3

The United States had no manufacturing facilities for artillery. As General John Pershing acknowledged, the American Expeditionary Force relied entirely upon French cannons, tanks, and planes. Yet, as British historian John Terraine writes, “The chief instrument of generalship throughout the war was, of course, the telephone.” Given the size of the battlefields, “Only the telephone, the uncertain, temperamental telephone of the second decade, gave generals any real power of command.”4

If America was going to position its immense armies quickly and command them effectively, it needed experts to handle this technology. At home, operating was sex-segregated. Women physically connected nearly every call made. So when Pershing arrived in France, he departed from precedent and law to recruit women. They must withstand torpedoes, cannon fire, and influenza to send the word over there. 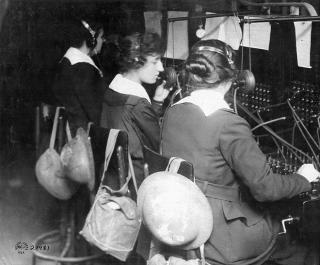 Most of the 223 “Hello Girls” worked behind the lines. A handful followed Pershing wherever he made his headquarters, from the short but intense Battle of St. Mihiel to the desperately extended Meuse-Argonne. Seven women ran the tactical switchboards 24-hours-a-day within range of artillery that lit the horizon and shook their equipment. This group achieved the highest aspiration of nearly every female Signal Corps member: to serve as near the battle as possible. Their leader was 25-year-old Grace Banker. Of 16,084 eligible Signal Corps officers, she was one of only eighteen to win the Distinguished Service Medal—and the only female.

“The importance of intercommunication in warfare can not well be exaggerated,” Brigadier General George Squier later explained. Without communications for even an hour, “the whole military machine would collapse.”5 And for communications to function, the Corps needed daring, patriotic, skillful women.

Half of the American men who served in World War One volunteered. All of the women did. Their service shaped a new role for women in the military and in the nation itself. America’s first female soldiers returned home to a country that finally offered them the vote—though the army denied them victory medals and veteran’s benefits. And so, another battle commenced.