Extreme Dining in the Gilded Age

The “Gilded Age,” a term coined by American author and satirist Mark Twain, was in many ways an era of stark extremes in our nation’s history. Ninety percent of the nation’s families earned less than $1,200 per year by the height of the period in 1890, while an elite 10% earned above it . The most affluent of American society enjoyed the luxury of newly invented conveniences like electric lights, sewing machines and phonographs, while most Americans lived in abject poverty–crowded into squalid and crime-ridden tenements or living in rural areas. 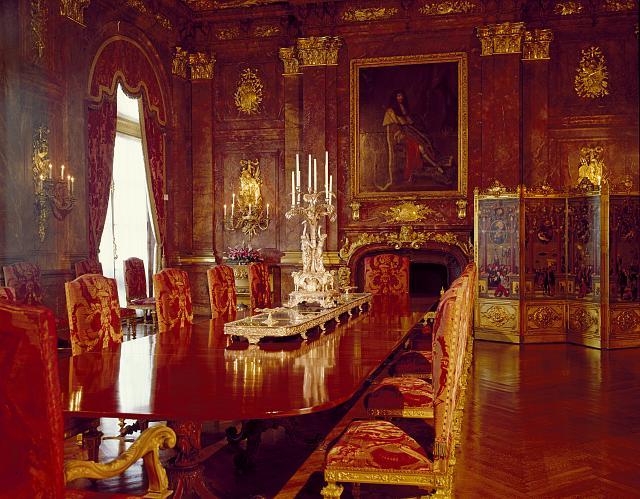 Dinning in the Gilded Age was no different–if you were lucky enough to exist in the wealthiest sets of society, your dinner table would hold a vast array of the most expensive and delicious cuisine around. If you did not live and travel within the wealthiest circles, however, food was often scarce. Although the quantity of food produced in America increased tremendously during the Gilded Age, many poor Americans suffered from hunger and malnutrition. In the new modern market economy, it was the inability to afford food that caused hunger as opposed to a lack of it.

The fine dining extravagance of the privileged classes was exemplified in popular women’s magazines of the day, like Godey’s Lady’s Book, which offered detailed instructions for throwing a proper dinner party, among other pursuits. The magazine set the standard for etiquette and its influential editor, Sarah Josepha Hale, was regarded as a connoisseur of all things fashion, cooking, literature and morality for the middle and upper class woman. 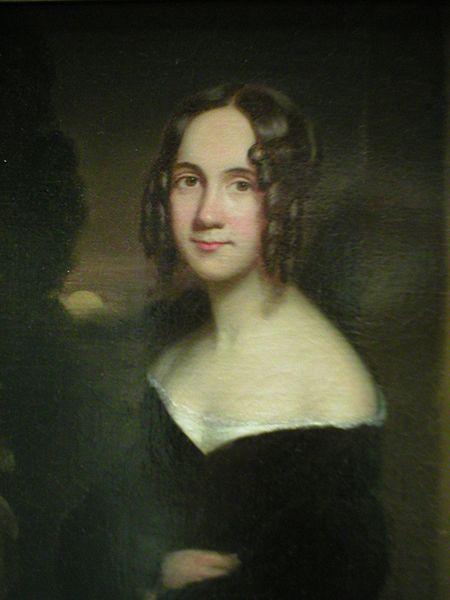 The dining room was the center of socializing and entertainment in the Gilded Age home and was expected to dazzle guests with its sumptuous elegance. “The most fashionable as well as pleasant way in the present day to entertain guests is to invite them to evening parties, which vary in size from the ‘company,’ ‘sociable,’ ‘soiree,’ to the party, par excellence, which is but one step from the ball,” declared Godey’s Lady’s Book.

In preparation for the dinner party the lady of the house would send out invitations two days to two weeks in advance of the gathering, depending on how elaborate the event was. A reply was always expected. In regards to this important phase of planning, Godey’s proffered, “In writing an invitation for a small party, it is kind, as well as polite, to specify the number of guests invited, that your friends may dress to suit the occasion. To be either too much or too little dressed at such times is embarrassing.”

Etiquette and dinner party fashion dictated that guests arrive between 7:30 and 8:30pm (8 o’clock was the most popular time for dinner). Guests had to be punctual and etiquette books of the time admonished being more than 15 minutes late. Guests dressed formally and the attire for gentlemen consisted of black pants, waist-coat and jacket, white tie, shirt and gloves; while the ladies wore formal evening dresses with accessories.

As guests arrived, the hostess (lady of the house) received them and after gathering in the parlor prior to dinner, they would all be called to dinner. “Be dressed and ready to receive your guests in good season, as some, in their desire to be punctual, may come before the time appointed,” instructed Godey’s. “As each guest or party enters the room, advance a few steps to meet them, speaking first to the lady, or, if there are several ladies, to the eldest, then to the younger ones, and finally to the gentlemen. Do not leave the room during the evening. To see a hostess fidgeting constantly going in and out, argues ill for her tact in arranging the house for company. The perfection of good breeding in a hostess is perfect ease of manner; for the time, she should appear to have no thought or care beyond the pleasure of her guests.” 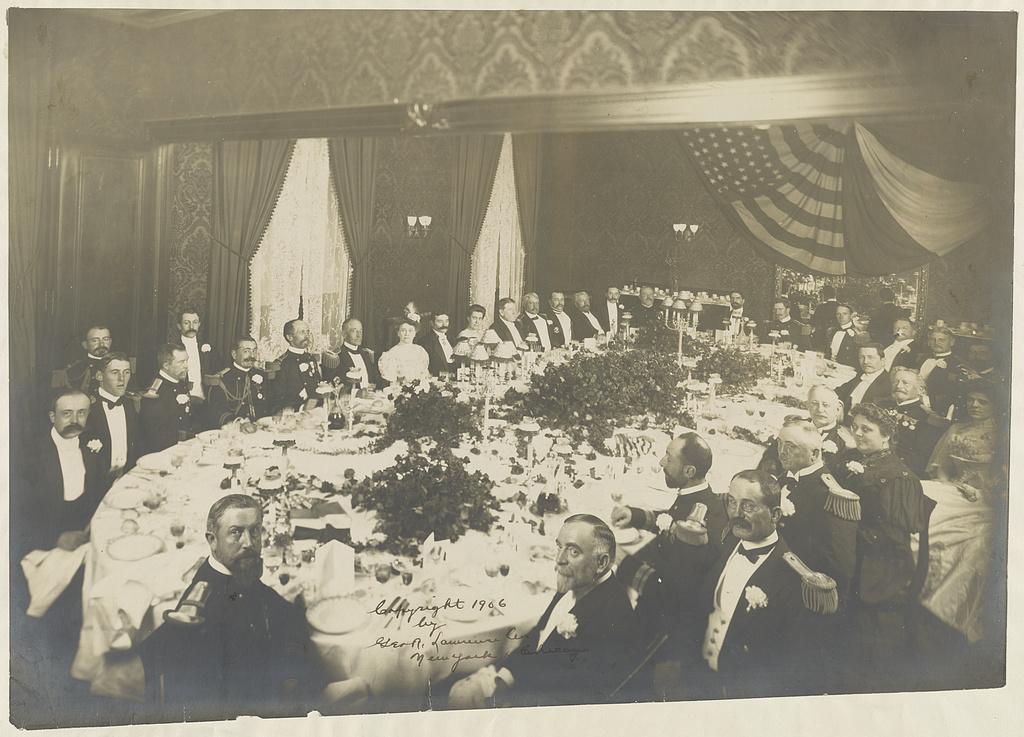 Dinner at Delmonico's Restaurant in 1906

Godey’s had specific instructions for dinner courses, “Bread should be cut in thin slices, and laid on a napkin on the left of each plate. Place glasses at the right of each plate. Commence dinner with raw oysters, then a choice of one or two soups. Follow the soup with fish, then the meat entree and the salad last. Cheese, bread and butter may be served with the salad course. Then comes dessert and or/fruits and bonbons. Coffee can be served in the drawing room or the parlor. No more than two vegetables should be served with each entree and potatoes should not be offered with fish.” 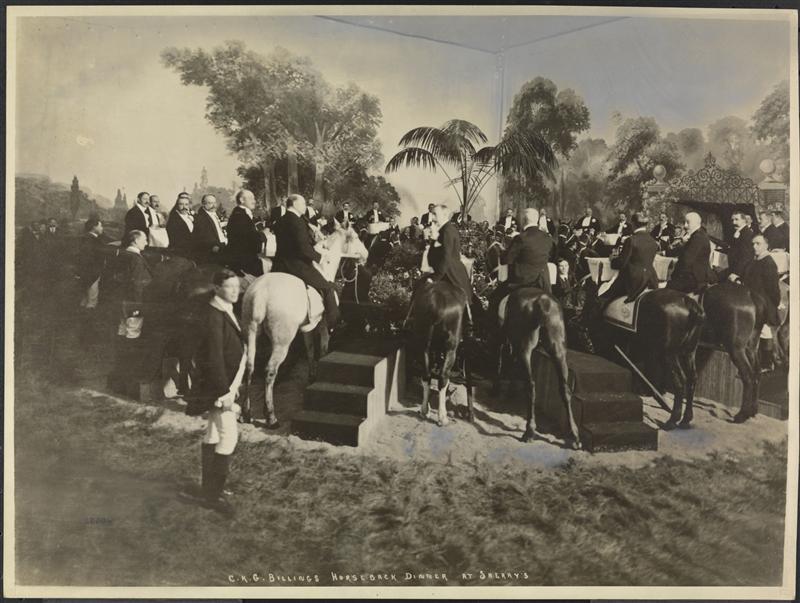 Although posh dinners usually took place inside elegant homes and restaurants, there are some notable instances of extreme dining experiences that took place in the unlikeliest of places–like sitting on horseback. Yes. Horseback. In one of the most ostentatious displays of Gilded Age excess and decadence, millionaire C.K.G Billing’s combined his love of horses and gastronomy into a lavish dinner on horseback with 36 of his closest male friends. The dinner took place on March 28, 1903 at Sherry’s, New York’s ritziest restaurant of the day on Fifth Avenue and 44th Street. The horses even got a fine meal out of it and were each fed an individual bag of oats! Total cost of the extreme meal: $50,000.

A timeline of the First Ladies of the United States.
READ MORE
Lesson Plan