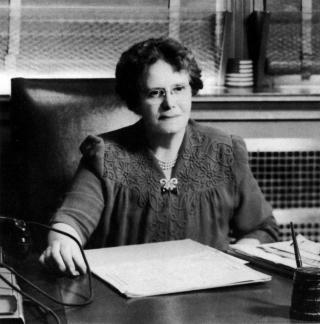 This summer, I had a chance to speak with college students who are interning at AARP, where I work. We talked about applying to college and having to write those personal essays in response to questions such as one I faced during my college application process: “If you could have dinner with one person, dead or still living, who would it be and what would you talk about?”

I know I answered this question back then with an eye to how my response could set me apart from the thousands of other high school seniors jockeying for acceptance at that same institution of higher learning. I know I was trying to elicit a certain reaction from the Admissions Office staff: “Wow, this is so creative!” “Gee, how original!” “This young lady’s essay reflects a maturity beyond her mere 17 years!”

Ah, the innocence of youth!

Now, fast forward a few decades and I really DO wish I COULD have dinner with the woman who founded AARP, Ethel Percy Andrus (1884-1967). She began her professional career as a teacher and then in 1917 was chosen as the first woman high school principal in California. In retirement in the mid-1940s, she became a champion of and advocate for the interests and needs of the elders in society after discovering a retired teacher forced by poverty to live in a chicken coop. In an essay published in the book Who is My Neighbor (1960), Dr. Andrus recalled that pivotal moment when she found another retiree “lonely, unneeded and forsaken.” 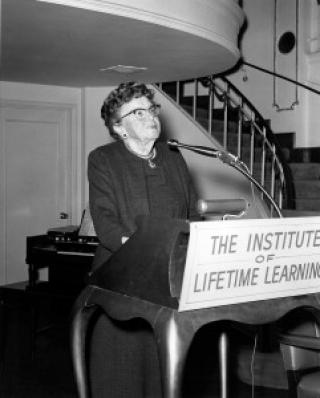 There are SO many questions I’d want to ask her and so many ways I could benefit from her wisdom and vision as a pioneer in fostering a more positive image of aging in society.

Experts say that aging is the most significant demographic trend of our time. Ethel Percy Andrus was truly ahead of her time in focusing on the challenges, and more important, the opportunities to individuals and to society of the bonus of the longer, healthier lives that we now are fortunate to experience in America.

During the 82 years of her life, she accomplished more than most of us could in two lifetimes: 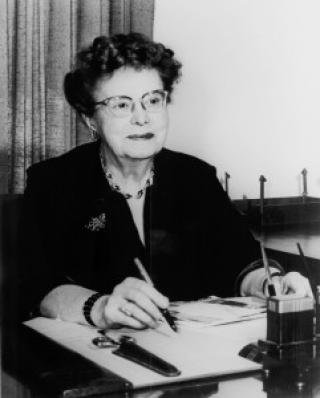 When Dr. Andrus arrived at Lincoln High School, it had a high rate of juvenile delinquency. She turned this institution around and the school won awards and became a case study praised by educators around the world. She and NRTA fought for better pensions for retired teachers and NRTA made available the first group health insurance program for educators age 65+ in 1956, nine years before Medicare.

If only I could ask her how she identified the strategies and tactics she used to solve the problems she faced and the challenges that she took on.

By being “the first,” how did she deal with the pressures of being a trailblazer? Did she have a circle of women who supported her? To whom did she turn for advice and counsel?

Nursing and teaching were really the only two professions open to women of her generation. If only I could listen to Dr. Andrus’s wisdom and apply them to the situations that women now face in a workplace and society in which more opportunities may be available but similar challenges and barriers still exist.

Even though Dr. Andrus spent the four decades of her professional life as an educator working with youth, the last twenty years of her life were devoted to addressing the rights, interests and needs of the elders of our communities. 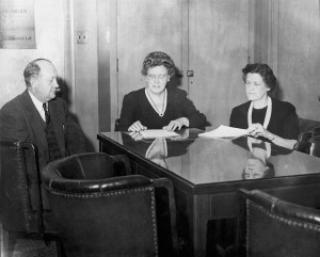 I would love to ask Dr. Andrus how she turned anger at injustice into action for positive social change. My Boomer Generation is often described as having participated in some of the greatest social changes in American history: the civil rights movement and the women’s movement. Perhaps our greatest challenge is to now take up the baton that Ethel Percy Andrus has handed us and continue her fight to change the perception that the elders of our society are a burden instead of a rich resource. She once wisely wrote that “life is a living, not an aging process.” I ask myself what will our generation do to live up to her vision:

We have demonstrated that old age is not a defeat but a victory, not a punishment but a privilege.

Lily Liu serves as AARP’s historian/archivist, and DID get accepted into the college of her choice.

Harlem Renaissance poet Anne Spencer lived her entire life in Virginia, where she tended her garden, worked as a librarian and teacher, hosted luminaries of Black intellectual and cultural life, and fought for equal rights for African Americans.
READ MORE
Biography

Often called the “Mother of the Blues,” Ma Rainey was known for her deep-throated voice and mesmerizing stage presence that drew packed audiences and sold hit records in the early twentieth century.
READ MORE
Lesson Plan

This lesson provides an insight into the rhetoric and social action of Fannie Lou Hamer. By focusing on three speeches through her career, students will better be able to understand how Hamer was an agent of change.
READ MORE
.