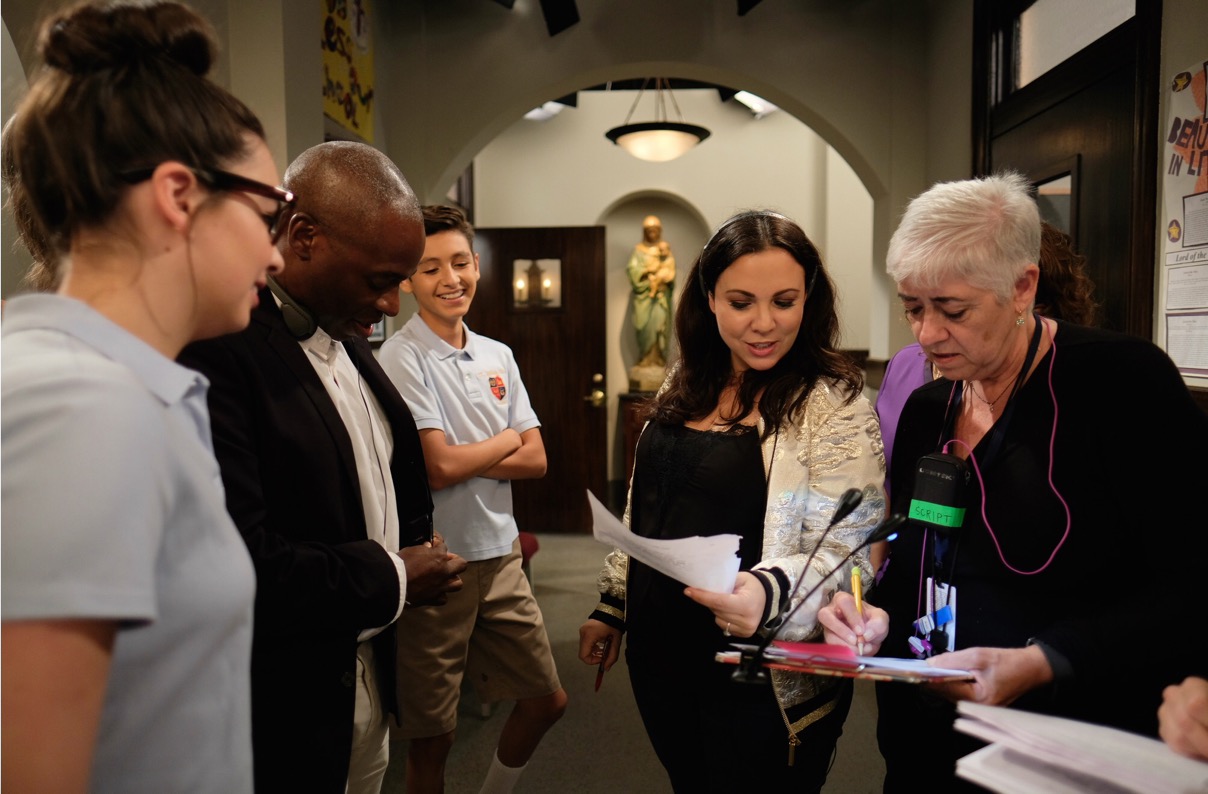 NWHM Ambassador Gloria Calderón Kellett is a leading Latina showrunner, writer, producer, and actress. The daughter of Cuban immigrants, Gloria spent her early years as a writer/producer on numerous shows including Devious Maids, Rules of Engagement, and How I Met Your Mother. She most recently served as coshowrunner for the reboot of One Day at a Time. Among her many accomplishments, The Hollywood Reporter included her in their Top Women in Entertainment issue, the THR100 list issue, and their 50 Agents of Change issue. We spoke with Gloria about her career, her work for equity and representation in Hollywood, and the people who inspire her most.

Tell us about your background and how you began your career.
I thought that I was going to be an actress because I wanted to be a storyteller. When you’re a little kid at six or seven watching TV, you think the actors must make up the words and that you’re watching them come up with this play. It wasn’t really until I was maybe 10 or 11 that I kind of noticed, “Oh, it says, ‘written by’ someone.”

When I first came to Hollywood, got an agent, and started going out for auditions, I was really struck by how the roles were for “gang banger’s girlfriend” and “gang banger’s sister.” They were really marginalized stereotypes and that’s all that was available to me. I was really surprised. I would go in for an audition and they always wanted an accent. They’d tell me, “Well, you don’t understand—this character’s parents are from another country.” I said, “Yeah, my parents are from Cuba and didn’t know a word of English. This is what I sound like.” It became clear that the people writing these scripts don’t know us. They are writing what they think is an experience, but they don’t actually know. I knew then that if I was going to see any change or be a part of any change in my lifetime, I was going to have to hold the pen. And the moment I made that adjustment, the world started to open.

At that point—I was 22, 23—I applied to grad school and got accepted to the University of London. I went there and just honed the writing. I wrote and acted and won awards and had an incredible time just learning and growing. When I came back I was more confident, but I didn’t know anyone in Hollywood. I really put myself out there and put up shows and was hustling until things started to shift. 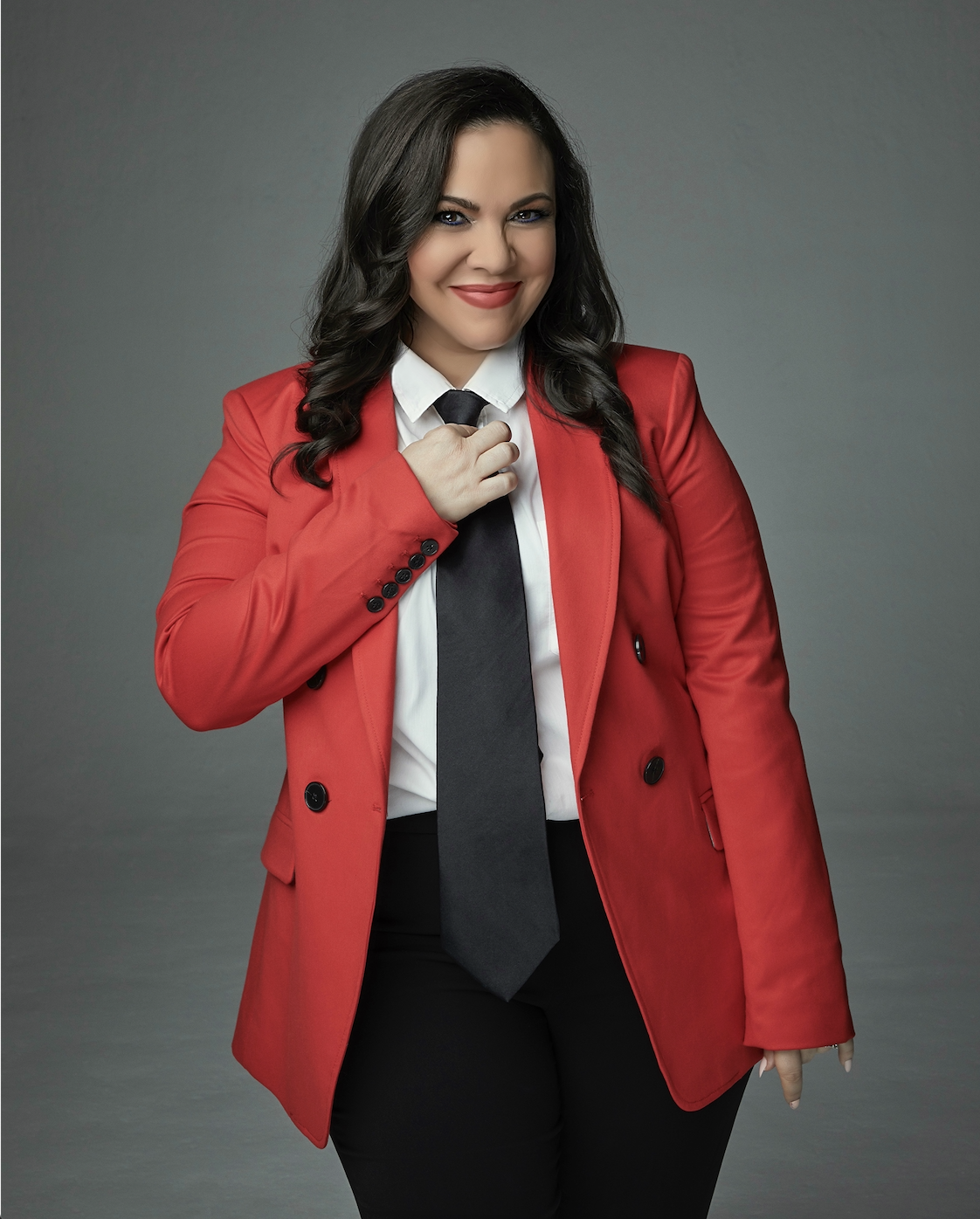 Who were your biggest influences growing up?
My mom, my parents. My parents came here not knowing any English, but they hit the ground running. They came here and nothing was going to hold them back, and they were a constant inspiration of what is possible with hard work and dedication. Education was always really, really important to them.

What has changed since your early days auditioning in Hollywood as it relates to women’s representation?
Not that much. We still have a lot of work to do. I’m glad that there are now flawed female leads—that has happened in the last 10 years—and we’ve moved away from just focusing on these sorts of “macho man” leads. People are starting to realize that women can be flawed and full characters. I remember what a revelation Nurse Jackie was and what a revelation it was to have even Grey’s Anatomy—to have this show be about a woman doctor! Oh my God, what a joy, and it’s because a woman made that show!

We are consistently coming into these spaces to right the wrongs by writing. Shonda Rhimes really led the way, and then Tina Fey for comedy. It was thrilling to be able to see, in my lifetime, those two women lead such a charge and be so visible. I would look at them and think, “So there’s two that are doing it, and if they can do it, I can find my way through this and figure this out, too.” It’s a joy to watch their work.

Talk a little bit about your work to give parity to women in front of and behind the camera and how you champion that in everything you do.
I was in all-male spaces when I started in Hollywood. The rooms were filled with straight white men in their 50s. Once you, as a woman, are in those spaces, you realize you’ve been made to feel too fat, too ugly, too old, too all these things by men. Men have been telling me the story of who I’m supposed to be. We’ve got to change that. No wonder we’ve been the pretty woman on the schlubby guy’s arm in all the shows for so long—it was some sort of strange wish fulfillment for these men. We must be able to be the center of the story and speak about the complexity of who women are.

Do you know, sometimes when I was in rooms with other women, we were told by certain men not to sit next to each other, because it makes the men uncomfortable? That even the seating arrangement of women must be a consideration speaks to the nervousness these men would have of having women in their spaces. Now that I’ve been doing it for a long time, when you do get a bunch of women in the room, the men love it. Because we cry and we talk about things. We give them permission to have real emotions and to feel and talk about things that maybe they don’t feel comfortable saying in other, more toxic male spaces. The men who have been in our rooms have loved it.

On my last show, With Love, there was a moment with Pepe Serna, an actor in his 70s and one of the longest working character Latino actors in the industry. He was in Scarface—he’s been around forever. We were rehearsing a scene, and Pepe said, “Hold on, hold on. I just want to take a moment because I’ve been doing this since the ‘50s and never have I looked in this direction and it’s all women.” And we looked around—my director is female. My director of photography is female. My scripty is female. My producer is female. Me. I was so grateful and moved that he forced us to kind of take a moment to take it all in. 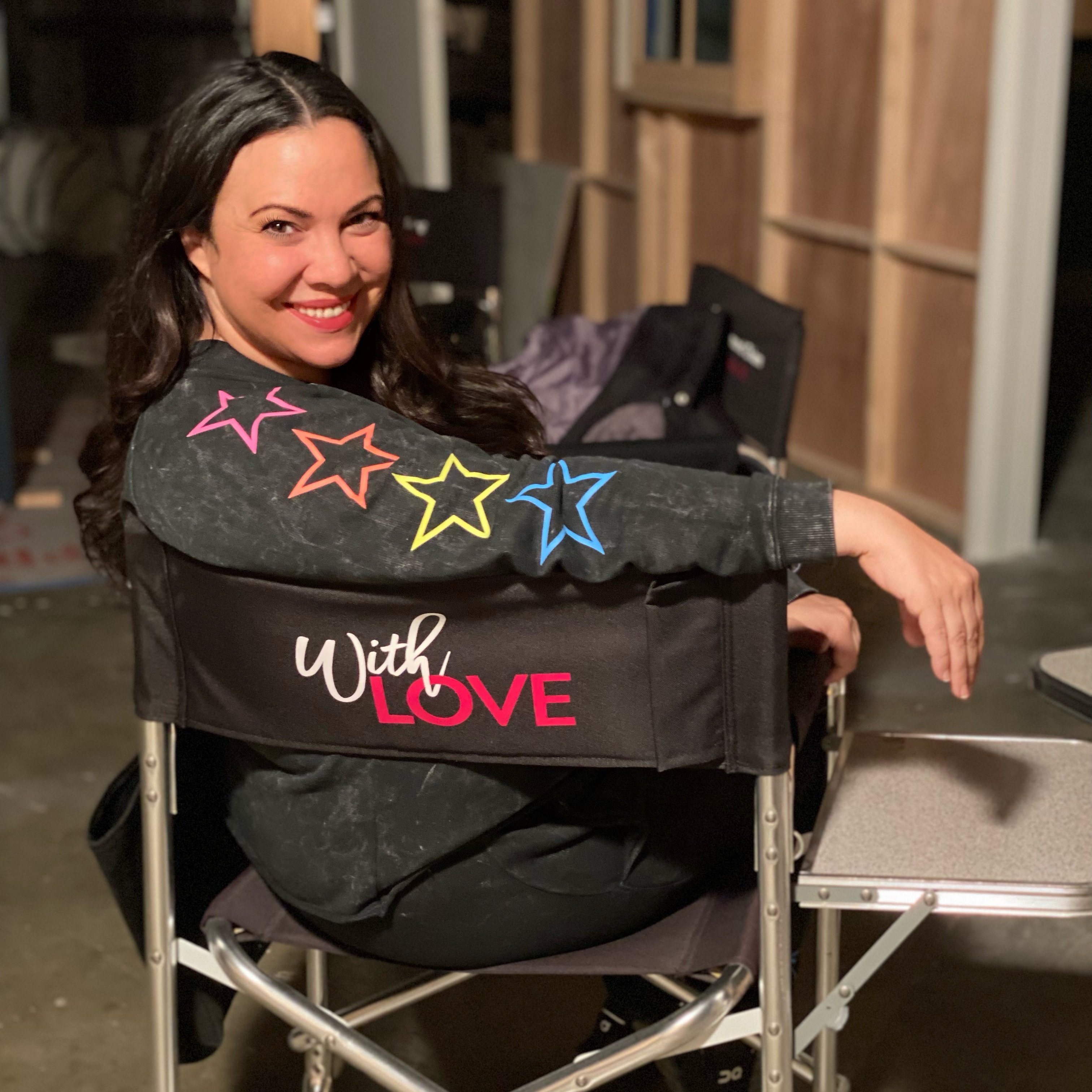 Gloria Calderón Kellett on the set of With Love.
"Ultimately, I’m trying to build inclusive spaces. That’s what’s important to me."

What advice would you have for younger women, particularly women of color, who hope to have a career in Hollywood?
Come on over, you’re welcome. It’s going to be a journey. Work on the craft. You have to work really hard, you have to be relentless, and you have to be excellent. Write and write and rewrite and rewrite. The better you get the more undeniable you become. And if you’re undeniable, then you’re going to be able to get through. How can more women be in positions of power in Hollywood? I would love to see more women as decision makers. That is exciting. We already have some powerful women who are coming in and making a culture shift, we just need more. Letting women know that these jobs are available, that they should be considering executive jobs—decision making jobs—and starting that journey and moving up the ranks. I feel like on the executive path, I’ve definitely seen more women. My entire team at Amazon is all women, and I’m thrilled because it’s additive. It’s beautiful and we all do better when there’s real equity and parity.

Can you tell us about your upcoming projects?
I hope everybody watches my new show, With Love, on Amazon Prime Video. That’s the one that I’m most excited about. It’s joyful. Every episode is a different holiday. It’s a rom-com. It’s warm and gorgeous, and everyone in it is gorgeous and fun and joyful and funny. I also have so much in development that has not yet been shot. I’m working on Verona, which is a modern-day take on Shakespeare set in a high school with Latino leads, and Glowing Up, a version of Emma but with a young queer kid who tries to get his classmates to fall in love. It’s a fun, big LGBTQ celebration. I also have a movie with Natasha Rothwell at HBO Max called We Were There, which celebrates a John Hughes world where Black and Brown people also exist. 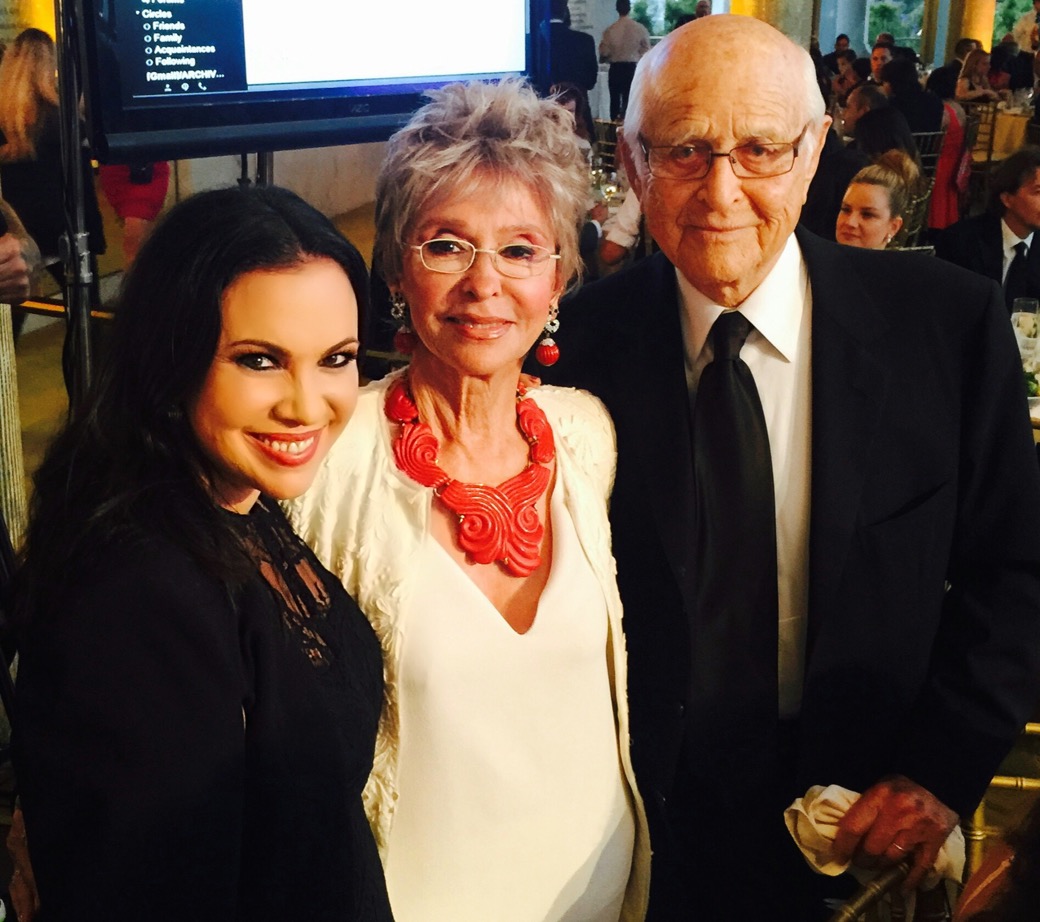 Gloria Calderón Kellett with Rita Moreno and Norman Lear.
"My shows are about humanity, they just happen to be Latino."

What are you most proud of professionally?
I’m really proud that I have two shows as a Latina creator. We very rarely get to have one, and I think I’m the first Latina with two. I hope that means that I get four and six and eight. I really want to grow up to be Norman [Lear]. Norman had nine shows at one point on at the same time! I’m also proud that I can add to the lexicon of expressing Latinidad and, really, humanity. My shows are about humanity, they just happen to be Latino. They’re about moms and daughters and family and love and figuring it out and doing our best. That’s what the work is about, too. I love it when people who are not Latino come up and tell me, “Oh my God, I love your show!” They’re speaking to the universal experience of being alive, and that’s ultimately what I want to be speaking to.