Yes, that’s right, fast food! We may think of the desire for fast food as being a 20th century phenomenon, but our colonial ancestors had the same desire for quick, convenient, and affordable fare that we do today.

During the 18th century, colonial cooks, especially working in taverns, faced serious pressure to get delicious food on the table and fast. Often, there was little time to carefully weigh their ingredients on scales, as was the custom in Europe. Scales were expensive and were replaced with measuring cups, glasses and spoons.

Working class women were unquestionably the busiest among colonial women. Mary Randolph wrote and published a cookbook in 1824 called The Virginia Housewife. In it she created recipes that were shortened and simplified and called for use of cup and spoon measurements.

Another popular Colonial-era cookbook was Hannah Glasse’s The Art of Cookery Made Plain and Easy and included easy-to-make meals that were fast and inexpensive.

“Boil a pot of water, according to the quantity you wish to make, and then stir in the meal till it becomes quite thick, stirring all the time to keep out the lumps, season with salt, and eat it with milk or molasses.”

It was the cooks, which included widowed women who worked in taverns, who were responsible for catering to the colonial’s desire for speedy food delivery. During America’s early years there were very few jobs for women outside of the home and the few jobs that widowed women were able to acquire required they work as needle-work instructors, seamstresses, tavern-keepers, milliners, governesses and cooks.

Tavern-keeping was especially difficult for widowed women in the absence of the additional salary of a spouse. Bacon, ham, and other pork products were very cheap and common foods served in taverns because of their abundance and the ability to preserve the meat for long periods of time. Hot biscuits were also a popular tavern food. Biscuits, rolls, bacon, and other pork products may have been combined to make sandwiches during this time. 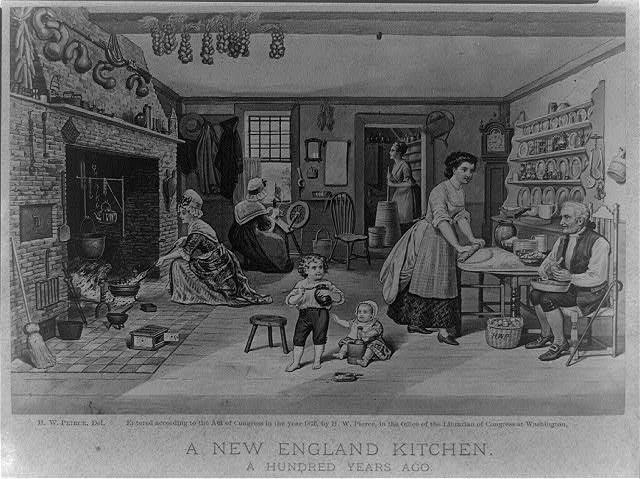 Hasty pudding was another food that gained popularity in colonial America because of its inexpensiveness. An American cookbook published in 1724 describes it as “cheap and very acceptable.” Puddings were both frugal and filling and were especially a favorite because of its short cook time. It also didn’t need to be wrapped in cloth like other puddings, just boiled in a pan. Gulielma Penn, wife of the Province of Pennsylvania founder, William Penn, even included a hasty pudding recipe in her family’s cookbook in 1702.

Early American women, much like 21stcentury women, were depended on to provide quick, tasty and affordable meals for their families and communities!

A timeline of the First Ladies of the United States.
READ MORE
Lesson Plan

This lesson focuses on the life and trials of Anne Hutchinson, who fought for the rights of women in mid-17th century New England.
READ MORE
Lesson Plan

Lesson plan that allows students to interview the staff at any historic site that focuses on women’s contributions to the past
READ MORE
.