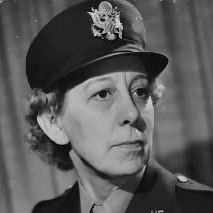 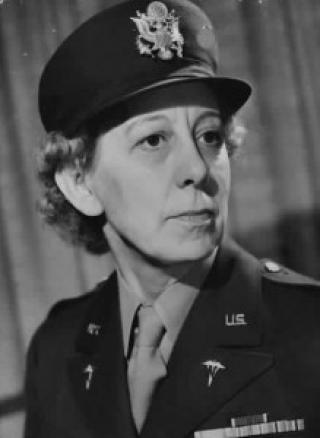 December 7th is Pearl Harbor Remembrance Day, when Americans commemorate the 1941 attack that brought the United States into World War II. The Japanese attack shocked a nation that had heretofore resisted entering foreign wars by bringing the conflict to its shores. Dozens of stories of heroism emerged after the attacks, including that of the inspiring courage of First Lieutenant Annie G. Fox (Army Nurse Corps), who received a Bronze Star for her actions. The Bronze Star, when awarded for bravery, it is the fourth-highest combat award of the US Armed Forces and the ninth highest military award in the order of precedence.

Lt. Fox was the Station Hospital’s Head Nurse at Hickam Field. The 30-bed hospital opened in November 1941, with six nurses. Lt. Monica E. Conter described the unit as “the happiest group of nurses anywhere, [under] the grandest chief nurse [Fox] who enjoys everything as much as we do.” Fox had joined the Army Nurse Corps in 1918, at the end of the First World War. While no stranger to military service, the surprise attack landed her in combat for the first time. The 47-year-old quickly took control of the situation as bombs rained down on the base.

Firsthand accounts of the attack by hospital staff described a terrifying and chaotic situation. Enemy airplanes flying so close and low that the nurses could see the pilots talking to each other were followed by explosions and masses of black smoke after each dive. Casualties poured into the hospital within minutes of the first bombing run. Hospital staff leaped into action as the constant noise of torpedoes, bombs, machine guns, and anti-aircraft guns filled the air. 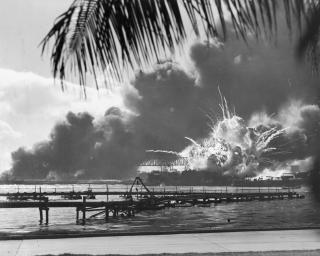 As the attack progressed, casualties multiplied while bombs fell around the hospital itself. One bomb left a 30-foot crater only twenty feet from the hospital wing, and another fell just across the street. The smoke and fumes were so severe that the hospital staff, fearing a gas attack, donned gas masks and helmets as they tended the wounded. The casualties suffered from serious shrapnel wounds particularly in the abdomen, chest, face, head, arms, and legs. The casualties were so numerous that nurses had time only to administer pain medication before triaging them on to Trippler hospital. The dead also passed through, their bodies a mangled mass of bone and bloody and charred tissue.

As Head Nurse, Lt. Fox rallied the nurses and organized the hospital’s response to the assault. The wives of officers and NCOs reported to the hospital to help, and Lt. Fox organized the civilian volunteers to make hospital dressings by the hundreds and assist with patient care. Lt. Fox herself participated in surgery, administering anesthesia, during the heaviest part of the bombardment. Afterwards, she, with the other nurses, tended to the wounded.

On October 26, 1942, in recognition of her efforts, Fox became the first woman in American history to be awarded the Purple Heart medal. Her citation read in part:

During the attack, Lieutenant Fox in an exemplary manner, performed her duties as head nurse of the Station Hospital… [She] worked ceaselessly with coolness and efficiency and her fine example of calmness, courage, and leadership was of great benefit to the morale of all with whom she came in contact.

Though at the time the Purple Heart award was most commonly awarded to service members wounded by enemy forces, it was occasionally awarded for any “singularly meritorious act of extraordinary fidelity or essential service.” The Purple Heart Award criteria changed in 1942 to be limited to wounds received as a result of enemy action. On October 6, 1944, Lt. Fox was awarded the Bronze Star Medal in replacement for her Purple Heart, which was rescinded. The Report of Decorations Board cited the same acts of heroism as for the Purple Heart.

The Army Nurse Corps had fewer than 1,000 nurses on December 7, 1941, the day of the Japanese surprise attack on Pearl Harbor. Eighty-two Army nurses were stationed in Hawaii serving at three Army medical facilities that infamous day. By the end of World War II, more than 59,000 American nurses had served in the Army Nurse Corps. Nurses worked closer to the front lines than in any prior conflict, providing invaluable service at great personal risk. Nurses received 1,619 medals, citations, and commendations during the war, including sixteen medals awarded posthumously to women who died as a result of enemy fire. Lt. Fox and her thousands of fellow nurses exemplified the courage and dedication of all who served.