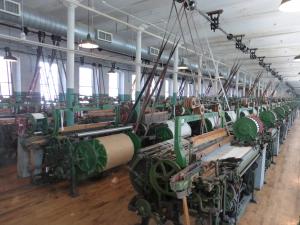 Through exploring primary source materials and classroom discussion, students will gain a richer understanding of the Industrial Revolution’s impact on the evolving roles of women in 19th century America, with particular focus on New England. Students will compare and contrast the roles of women in traditional rural settings with the emerging urban landscapes of the early 19th century and compare the education, skills and employment opportunities for women with their 21st century world.

Two to three class sessions or consider shaping the assignment as an online blog discussion.

Understanding of the development of the “market economy” in the early 19th century. Knowledge of the Lowell system.

Other resources are found in the in the attached lesson plan making use of primary source documents particularly from the collection found at Old Sturbridge Village.

Discuss with your students that during the colonization of the British New World by British and other numerous other European settlers from the 17th through the early 19th century, the life of women remained relatively static. The vast majority of colonists, particularly in New England, were engaged in the economic activity of subsistence farming. A family owned and operated farm relied on a large nuclear (and sometime extended) family working in order to squeeze out an existence.

Women in these households were responsible not for only cooking, cleaning, and the care of young children but also in the process of carding, spinning, weaving, and ultimately sewing the material necessary in making the family  clothing. As time went on many households participated in the “putting out system” a sub-contract labor system by which they were paid to complete certain processes—card, spin, or weave raw materials—by an entrepreneur or factory agent.

By the early 19th century, the Industrial Revolution began to transform industry both in Europe and the United States. Beginning in Great Britain with such inventions as the spinning jenny, steam engine, and power looms and the cotton gin in the United States, new sources of power and automation began to transform the production of goods, particularly in textile manufacture. In New England, which became the center of the textile production in the United States, water powered looms modernized and transformed the textile industry and created urban centers. The change from a primarily rural and agriculture-based economy to an urban and manufacturing economy radically altered the lives of families—and young women—in New England. The move to an economy based on turning raw materials into finished goods such as textiles began to replace the subsistence farming and piecemeal putting out system and created employment opportunities for “factory girls.” In a relatively short period, the traditional barter economy evolved into the “money economy” we use today where transactions from buying good to paying wages is a money-based system.

As the textile industry developed, young women began to migrate away from rural farms to the new urban centers of Waltham and Lowell where they found work in America’s first textile factories. Their experience of working for their family’s “putting out system” had provided skill in carding, spinning, and weaving needed by the factory owners. Here they experienced freedom with new friendships, opportunities, and cash wages. Many, if not most, had never been to cities and now they lived in company boarding houses with girls of similar age and background; attended educational lectures, plays and other cultural activities. These factory girls were not only part of revolutionizing industry; they began to revolutionize the role of women in industry.

Activity One: The Rural Life of 19th Century Women

In Activity One and Two, students, working collaboratively or individually will read primary sources to explore the lives of rural and urban women in the 19th century and consider them within the context of their 21st century lives.

This assignment can also be formatted as a classroom blog.

Working collaboratively or alone, ask student to read the following:

If working in groups; each group member is responsible for reading at least one primary source and sharing the information with teammates:

Each group member will compare and contrast what their source reveals about a 19th century rural woman or rural life to the 21st century. What are obvious differences? Are their similarities? If so, discuss the similarities.

Prompt: Is one life more fulfilling than another? Why or why not?

Each group member will compare and contrast what their source reveals about a 19th century urban woman or urban life to the 21st century. What are obvious differences? Are there similarities? If so, discuss the similarities.

Now that you have had the chance to compare and contrast the lives of women in the 19th century to those of the 21st century, consider the following quotes before responding to the final prompt.

… Those who labour in the earth are the chosen people of God, if ever he has chosen people, whose breasts he has made peculiar deposit for substantial and genuine virtue.

… While we have land to labour then, let us never wish to see our citizens occupied at a workbench, or twirling a distaff. Carpenters, masons, smiths, are wanting in husbandry: but, for the general operations of manufacture, let our work-shops remain in Europe. It is better to carry provisions and materials to workmen there, then bring them to the provisions and materials, and with them their manners and principles. Thomas Jefferson, Notes on Virginia (1785)

The Cotton Mill, invented in England, within the last twenty years, is a signal illustration of the general proposition, which has been just advanced. In consequence of it, all the different processes for spinning Cotton are performed by means of Machines, which are put in motion by water, and attended chiefly by women and Children; and by a smaller number of persons, in the whole, than are requisite in the ordinary mode of spinning. And it is an advantage of great moment, that the operations of this mill continue with convenience during the night as well as through the day. The prodigious effect of such a Machine is easily conceived. To this invention is to be attributed essentially the immense progress, which has been so suddenly made in Great Britain, in the various fabrics of cotton. Alexander Hamilton, Report on Manufactures (1791)

I cannot believe that our factory system is the best mode by which men may get clothing. The condition of the operatives is becoming every day more like that of the English; and it cannot be wondered at, since, as far as I have heard or observed, the principal object is, not that mankind may be well and honestly clad, but, unquestionably, that the corporation may be enriched. Henry David Thoreau, Walden (1854)

As one digs deeper into the national character of the Americans, one sees that they have sought the value of everything in this world only in the answer to this single question: how much money will it bring in? Alexis de Tocqueville, Democracy in America (1835)

I get along very well with my work. I can doff as fast as any girl in our room. I think I shall have frames before long. The usual time allowed for learning is six months but I think I shall have frames before I have been in three as I get along so fast. I think that the factory is the best place for me and if any girl wants employment I advise them to come to Lowell. I have little time to devote to writing. . . . There are half a dozen letters which I ought to write to day but I have not time. Tell Harriet I send my love to her and all of the girls. Give my love to Mrs. Clement. Tell Henry this will answer for him and you too for this time. Mary S Paul (Lowell Mill Girl-December 21, 1845)

Doubtless you have been looking for a letter from me all the week past. . . . I was unable to get my old place in the cloth room on the Suffolk or on any other corporation. . . . So I went to my old overseer on the Tremont Cor[poration] . . . and I went to work last Tuesday--warping--the same work I used to do.

It is very hard indeed and sometimes I think I shall not be able to endure it. I never worked so hard in my life but perhaps I shall get used to it. . . . The wages are to be reduced on the 20th of this month. . . . The companies pretend they are losing immense sums every day and therefore they are obliged to lessen the wages, but this seems perfectly absurd to me for they are constantly making repairs and it seems to me that this would not be if there were really any danger of their being obliged to stop the mills.

It is very difficult for any one to get into the mill on any corporation. All seem to be very full of help. I expect to be paid about two dollars a week but it will be dearly earned. . . . Mary S Paul (Lowell Mill Girl-November 5, 1848)

Using the quotes, previous web links, text and any other source you deem appropriate respond to the following prompt.

Use and cite illustrative historical details in your responses in order to offer evidence to support your choice.

Depending on the method utilized in the classroom the assessment/homework can either be a series of short answer responses that address the prompts (use of your classroom short answer response rubric can be used or see attached rubric). This works well done over three or more class days, while giving time to discuss the primary source documents with students in class.

Teachers are always free and encouraged to modify and/or set up the readings, rubrics, and assessments to meet the personality of their classroom.

When starting the study of the Seneca Falls Convention and the Declaration of Sentiments, this lesson gives students a reference point in understanding the beginnings of the “woman’s movement” in America.

Read closely to determine what the text says explicitly and to make logical inferences from it; cite specific textual evidence when writing or speaking to support conclusions drawn from the text.

RH.9-10.1. Cite specific textual evidence to support analysis of primary and secondary sources, attending to such features as the date and origin of the information.

Determine central ideas or themes of a text and analyze their development; summarize the key supporting details and ideas.

RH.9-10.2. Determine the central ideas or information of a primary or secondary source; provide an accurate summary of how key events or ideas develop over the course of the text.

Analyze how and why individuals, events, or ideas develop and interact over the course of a text.

RH.9-10.3. Analyze in detail a series of events described in a text; determine whether earlier events caused later ones or simply preceded them.

D2.His.1.9-12. Evaluate how historical events and developments were shaped by unique circumstances of time and place as well as broader historical contexts.

D2.His.14.9-12. Analyze multiple and complex causes and effects of events in the past.