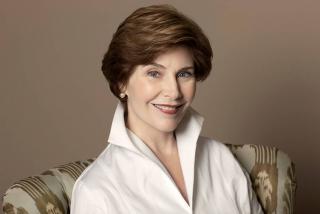 Laura Bush, former First Lady of the United States, is an advocate for literacy, education, and women’s rights. After leaving the White House, President and Mrs. Bush founded the George W. Bush Presidential Center in Dallas, Texas. The Center is home to the Bush Presidential Museum and Library and the George W. Bush Institute, a public policy center established to advance human freedom, economic growth, education reform, and global health.

Laura Bush is a leading voice for spreading freedom and promoting human rights across the globe. For more than a decade, she has led efforts through the U.S.-Afghan Women’s Council to protect the hard-earned rights of women in that country. As First Lady, she made three trips to Afghanistan and in 2001 she delivered the President’s weekly radio address – a first for a First Lady – to direct international attention to the Taliban’s oppression of women.

Long a supporter of the people of Burma, in 2006 Laura Bush hosted a roundtable discussion on Burma at the United Nations headquarters in New York. After Cyclone Nargis devastated the country in May 2008, she held an unprecedented press conference in the White House Press Briefing Room and urged the ruling junta to accept international aid. She then traveled to the Thai-Burma border, where she met with Burmese refugees. In 2012, Mrs. Bush helped to bestow the Congressional Gold Medal to Burmese opposition leader Daw Aung San Suu Kyi. The legislation for the medal, signed by President Bush, had been awarded to Aung San Suu Kyi in 2008 when she was under house arrest.

As First Lady, Mrs. Bush advocated the importance of literacy and education to advance opportunity for America’s young people and to foster healthy families and communities. She highlighted the importance of preparing children to become lifelong learners, convening in 2001 a White House Summit on Early Childhood Cognitive Development. Since 2003, she has served as the Honorary Ambassador for the United Nations Literacy Decade. Laura Bush visited schools and met with students in nations from Afghanistan to Zambia, with a particular focus on the education of girls and women. Mrs. Bush worked with the Library of Congress to create the National Book Festival in Washington, D.C. in 2001. The National Book Festival continues to this day and annually attracts more than 120,000 Americans. The Texas Book Festival in Austin was founded in 1996 by Mrs. Bush while she was First Lady of Texas. At the Bush Institute in Dallas, President and Mrs. Bush’s Education Reform initiative works to improve student achievement through effective school leadership, middle school transformation, and the use of accountability.

Because heart disease is the leading cause of death among American women, in 2003 Laura Bush partnered with the National Heart, Lung, and Blood Institute to launch The Heart Truth campaign and the Red Dress project. The Heart Truth campaign aims to raise awareness among women about their risk for heart disease. In 2006, she helped launch the first international partnerships for breast cancer awareness and research. As First Lady, she visited countries in Europe, the Middle East, Central and South America to support programs that help women detect breast cancer early so they can seek treatment when it has the best chance of success. Mrs. Bush has visited more than a dozen countries to support the President’s Emergency Plan for AIDS Relief and the President’s Malaria Initiative. Today through the Bush Institute, Laura and George Bush continue their work to promote women’s health through Pink Ribbon Red Ribbon, a health initiative that adds the testing and treatment of cervical and breast cancer to PEPFAR in sub-Saharan Africa.

Mrs. Bush is the author of the bestselling memoir, Spoken From the Heart, and bestselling children’s book, Our Great Big Backyard. She serves on many boards, including the National Advisory Board for the Salvation Army, the Council for the Smithsonian National Museum of African American History and Culture, and the Board of Trustees for the National Trust for Historic Preservation.

Laura Bush was born in Midland, Texas, to Harold and Jenna Welch. She holds a Bachelor of Science degree in education from Southern Methodist University and a master’s degree in library science from the University of Texas. She taught in public schools in Dallas, Houston and Austin and worked as a public school librarian. She served as First Lady of Texas from 1995 to 2000. President and Mrs. Bush are the parents of twin daughters, Barbara and Jenna, son-in-law, Henry Hager, and proud grandparents of Margaret Laura “Mila” and Poppy Louise Hager. The Bush family also includes two cats, Bob and Bernadette, as well as Freddy the dog.