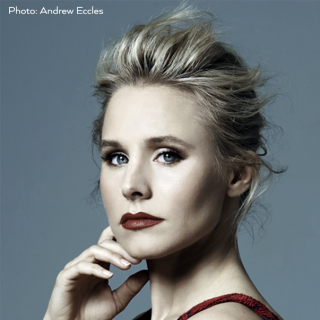 Kristen Bell is currently filming the NBC series “The Good Place,” opposite Ted Danson, which returns for a third season this fall. She most recently narrated the IMAX documentary PANDAS and will lend her voice to the upcoming animated film “Teen Titans Go! to the Movies,” to be released July 27, 2018. She will also star in the Netflix comedy “Like Father” opposite Kelsey Grammer, to be released on August 3, 2018.  Last year, Bell executive produced and appeared in the ABC special “Encore,” about former high-school classmates who get together for an encore performance of their old musical theater productions. She also reprised her role as ‘Anna’ in “Olaf’s Frozen Adventure,” a featurette based on the blockbuster Disney animated feature “Frozen,” that was released alongside Pixar’s “Coco.” She is working on the sequel to “Frozen,” scheduled to hit theaters in fall 2019. “Frozen” has grossed over $1.2 billion worldwide, making it the highest grossing animated film of all time. Bell also starred in “A Bad Moms Christmas,” alongside Mila Kunis and Kathryn Hahn. The film is a sequel to 2016’s “Bad Moms,” the first STX film to gross over $100m domestically.

In 2016, Bell was seen as ‘Jeannie Van Der Hooven’ in the Showtime series “House of Lies” opposite Don Cheadle, which wrapped its fifth and final season.  In 2014, Bell reprised her beloved title role in Warner Brothers’ film “Veronica Mars," which raised $2 million on Kickstarter in less than eleven hours and broke the record at the time for the fastest project to reach $1 million and $2 million. She appeared in a guest-starring arc on NBC’s hit series “Parks & Recreation” and played the lead role in the independent film “The Lifeguard,” which premiered at the 2013 Sundance Film Festival.