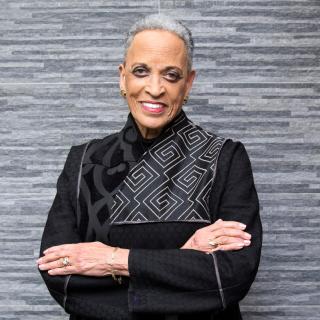 Johnnetta Betsch Cole is a Principal Consultant with Cook Ross, Inc., a consulting firm located in Silver Spring, Maryland, USA.  The firm provides solutions to organizations around the world in the areas of diversity, inclusion, cultural competency, leadership development and organizational change management.  Before assuming her current position, she served for eight years as the Director of the Smithsonian National Museum of African Art (NMAfA).  The National Museum of African Art is the only national museum in the United States dedicated to the collection, exhibition, conservation and study of the arts of Africa.  When she retired from the museum on March 31, 2017, Dr. Cole was given the title of Director Emerita.

Johnnetta Betsch Cole attended Fisk University in the early entrance Basic College Program.  She went on to Oberlin College where she received her undergraduate degree.  Her Masters and Ph.D. in anthropology with a specialization in African Studies were received from Northwestern University.

Dr. Cole has held teaching and administrative positions in anthropology, women’s studies and African American studies at Washington State University, UCLA, University of Massachusetts at Amherst, Hunter College and Emory University.  She has written and edited numerous publications for scholarly and general audiences, including Conversations: Straight Talk With Americas Sister President; All American Women: Lines That Divides, Tides That Bind; With Beverly Guy-Sheftall, Gender Talk: The Struggle for Women’s Equality in African American Communities; and with Rudolph P. Byrd and Beverly Guy-Sheftall, I Am Your Sister, Collected and Unpublished Writings of Audre Lorde.

Johnnetta Betsch Cole was the first African American to serve as the chair of the board of United Way of America.  She formerly served on the corporate boards of Home Depot, Merck and Nation’s Bank South, and was the first woman to serve on the board of Coca-Cola Enterprises.  She currently serves on the board of Martha’s Table, an organization in Washington, DC that provides support for children, families and communities.

From 2015 to 2016, Dr. Cole was the president of the Association of Art Museum Directors.  Cole recently co-chaired the American Alliance of Museum’s Working Group on Diversity, Equity, Accessibility and Inclusion.  She is a fellow of the American Anthropological Association and a member of the National Academy of Arts and Sciences.  She is currently a Senior Consulting Fellow at the Andrew W. Mellon Foundation.

Dr. Cole is the National Chair and Seventh President of the National Council of Negro Women.  She is a member of Delta Sigma Theta Sorority and the Links, Inc.

Dr. Cole has received numerous awards and is the recipient of 68 honorary degrees.  Throughout her career, she has addressed issues concerning Africa and the diaspora.  And in her published work, speeches, and community service, she speaks to issues of racial, gender and all other systems of inequality.

Johnnetta Betsch Cole is married to James D. Staton, Jr.  She is the mother of three sons and one stepson.  She has three grandchildren and is a mentor to many young women and men.