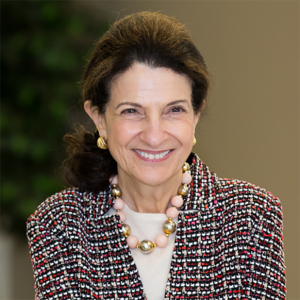 Former United States Senator Olympia J. Snowe has been in politics since she was in her early twenties. When she was elected to the U.S. House of Representatives at the age of 31, Snowe became the youngest Republican woman, and the first Greek-American woman ever elected to Congress. She was also the first woman in American history to serve in both houses of State Legislature and both houses of Congress. Her work as a leader and advocate continues to inspire generations of young women.

Olympia Jean Bouchles was born on February 21, 1947 in Augusta, Maine. One of two children, her mother passed away from breast cancer. Less than a year later, her father died of heart disease. At the age of nine, Bouchles became an orphan. She moved to Auburn, Maine to be raised by her aunt and uncle in the area. From third to ninth grade, Bouchles attended St. Basil Academy, a Greek Orthodox school in Garrison, New York. However, she finished her grade school career at Edward Little High School in Auburn, Maine. After graduating from high school, Bouchles attended the University of Maine and earned a degree in political science in 1969. On December 29, 1969, she married Republican state legislator Peter T. Snowe and became Olympia J. Snowe.

Shortly after graduation, Snowe entered politics and began working with Congressman William Cohen on the Board of Voter Registration. However, in 1973 Snowe’s husband was tragically killed in a car accident. At age 26, Snowe ran for his seat in the Maine House of Representatives and won. She was re-elected in 1974, before being elected to the Maine Senate in 1976. While working in the Senate, Snowe was also selected as a delegate to both the State and National Republican Conventions. Before her election to the U.S. Senate, Snowe represented Maine’s Second Congressional District in the U.S. House of Representatives for sixteen years. She was the first woman in American history to serve in both houses of a state legislature and both houses of Congress. When first elected in 1978 at the age of 31, Snowe was the youngest Republican woman, and the first Greek-American woman ever elected to Congress. She has won more federal elections in Maine than any other person since World War II, and is the third longest serving woman in the history of the Congress. During this time, she also co-chaired the Congressional Caucus on Women’s issues for ten years.

In 1994, Snowe was elected to the U.S. Senate. She served in the Senate until January 2, 2013, after being re-elected in 2006 to her third and final six-year term. During her career she served as Chair and Ranking Member of the Senate Committee on Small Business and Entrepreneurship; became the first Republican woman ever to secure a full-term seat on the Senate Finance Committee; and the first woman Senator to chair the Subcommittee on Seapower of the Senate Armed Services Committee. She was also a member of the Senate Commerce, Science, and Transportation Committee, the Budget Committee, the Foreign Relations Committee and the Senate Intelligence Committee. Snowe’s political beliefs lead her to co-chair the Senate Centrist Coalition from 1999-2006. In 2005 she was named the 54th most powerful woman in the world by Forbes magazine, and in 2006 Time Magazine named her one of the top ten U.S. Senators.

Detailing her years of experience, Snow published a book entitled Fighting for Common Ground: How We Can Fix the Stalemate in Congress in May of 2013. In 2014, Snowe founded the Olympia Snowe Women’s Leadership Institute, a nonprofit organization dedicated to encouraging high school girls to be leaders. Today, the charity serves 465 students at 36 public high schools, pairing them with more than 200 trained advisors. Snowe currently serves as a member of the Institute’s Board and is the Honorary Chair. Recognized for her leadership, Snowe was acknowledged as one of the “NACD Directorship 100,” an annual list developed by the National Association of Corporate Directors. She is also the member of the Board of Directors of various organizations, and is a Senior Fellow at the Bipartisan Policy Center in Washington, D.C.