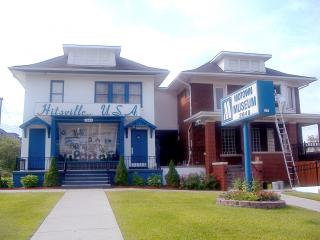 If you like Motown music, you may be familiar with Berry Gordy, founder of Motown Records and genius behind the “Motown Sound” that swept the nation and world in the 1960s. But have you heard of Esther Gordy Edwards, Berry Gordy’s sister? Edwards started a co-op to provide money to family members in times of need and, in 1959, Gordy approached his family needing an $800 loan to start a record label. Gordy’s family members all agreed, except Edwards who questioned whether her brother could successfully run a business after a series of taking and leaving numerous jobs. She eventually decided to loan Gordy the money, which he used to create what would become Motown Records. Gordy later stated that his sister’s reluctance to lend him the money made him decide that he wanted her, out of their seven other siblings, to run the business side of the company.

Over the decades Edwards spent working with Motown, she was an integral part of the company’s executive operations, serving as executive secretary, CEO, and Vice President. She also headed Motown’s international operations, and scheduled and booked Motown’s famed Motortown Revue concert tours, which brought many of the label’s biggest acts to cities across the United States. The success of the Motortown Revue is often cited for helping to dissolve racial barriers in entertainment by making live music an enjoyable, integrated event. When Motown’s main offices moved from their building “Hitsville U.S.A.” in Detroit, Michigan to Los Angeles, California in 1972, Edwards stayed behind to run their headquarters in Detroit. Fans would stop by and ask for a tour of Studio A, where the early smash hits of the Motown label were recorded. Edwards realized Hitsville U.S.A. was an important part of American popular culture history, so she gathered all the Motown memorabilia she had been saving since the beginning and founded the Motown Museum in 1985, two years before the building was designated a Historic Site by the state of Michigan. As president of the museum, Edwards oversaw the restoration and renovation of the building and over a million adoring Motown fans came to see where their favorite musicians made history. Earlier this year, the Motown Museum opened its “Girl Groups: The Grit, The Glamour, The Glory” exhibit highlighting the female stars and women behind the spotlight who helped make the Motown Sound possible.

One of Motown’s famous girl groups is The Marvelettes. All of Motown’s most popular groups had crossover success with both R&B and mainstream pop audiences, but The Marvelettes’ song, “Please Mr. Postman,” was the first Motown record to reach the number one position on Billboard’s Hot 100 pop singles chart in 1961. Marvin Gaye, who was working as a studio drummer for Motown at the time, played drums for on the track (Gaye also later co-wrote another Marvelettes hit, “Beachwood 4-5789”). “Please Mr. Postman” has been covered numerous times, including by the Beatles for their 1963 album, With The Beatles, and by The Carpenters who also scored a number one hit with the song in 1975.

Martha and the Vandellas are known for their many hits, including “Quicksand,” “Nowhere to Run,” and “Jimmy Mack.” Their 1964 song, “Dancing in the Street” became the quintessential Motown song, was adopted by the Civil Rights Movement as an anthem, and is on the Library of Congress’ National Recording Registry, which collects and preserves culturally significant audio recordings. Martha and the Vandellas also released Motown’s first protest song, “I Should Be Proud,” which came out in 1970 shortly before The Temptation’s “Ball of Confusion” and Edwin Starr’s “War?” The song is a criticism of the Vietnam War and “the evils of society” that sent the narrator’s love off to fight and die. “I Should Be Proud” was one of Motown’s most controversial releases and was banned from the radio in some markets. According to Martha Reeves, the lyrics of the song even got her tracked for a bit by the CIA.

Of all of Motown’s acts, none was more commercially successful than the Supremes, who had 12 number one hits on Billboard’s Hot 100 chart. They are the only group to hit that position with five consecutive singles, starting with “Where Did Our Love Go” in 1964. Their 1966 album, The Supremes A’ Go-Go, was the first by an all-female group to hit number one, outselling the Beatles’ Revolver. Songs in their repertoire like “Love Child” and “Stop! In the Name of Love” touched on issues that directly related to women, but their songs were universal enough to gain mainstream popularity, making them major stars. The group’s massive worldwide appeal helped make the Supremes one of the first musical groups of the 1960s to get commercial endorsement deals – for Coca-Cola, Arrid deodorant, and their own Supremes White Bread.

Agnes de Mille was one of the preeminent American choreographers of the twentieth century.
READ MORE
Biography

Beverly Cleary created some of the most beloved children’s book characters of the 20th century.
READ MORE
Biography