A Two-Dimensional View of Fashion 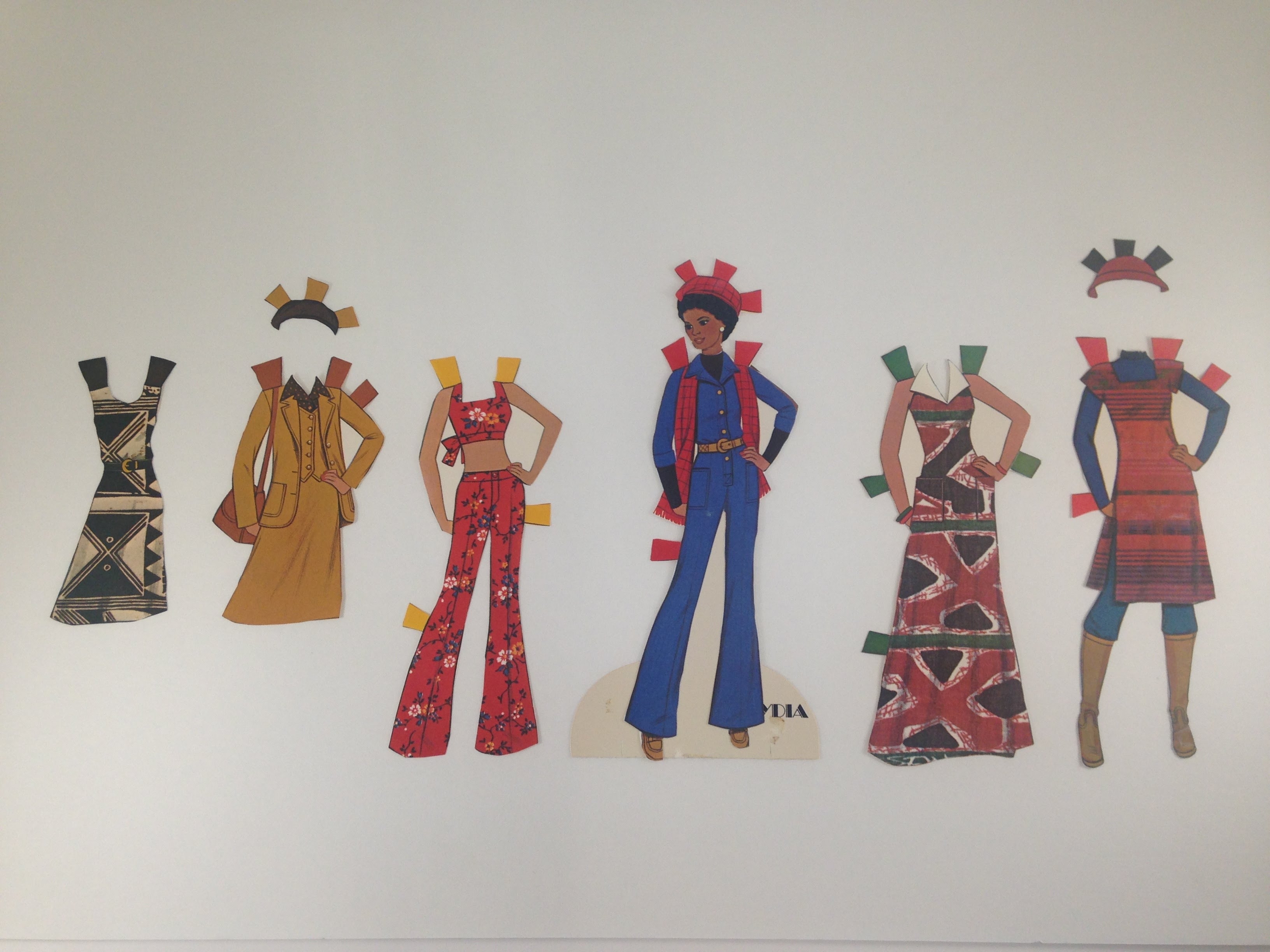 While everybody wears clothing, not everyone wears fashion. In choosing to wear fashion—rather than just clothing—the wearer makes a statement about herself and her sense of identity. Individuals use fashion to place themselves in (or out) of groups, demonstrate their places in society, and communicate not only who they are but also who they aspire to be. But a collection of individuals makes up a society. While fashion choices are ultimately individual, fashion trends reflect society’s culture, norms, expectations, and values.

Paper dolls as artifacts illustrate the social expectations for women at particular moments in time. As products of both popular culture and mass marketing, paper dolls are intentionally designed to reflect that society’s idealized version of womanhood. The dolls’ little paper wardrobes communicate a wealth of information about the ideal woman of the past.

Paper dolls were popular playthings from the mid-19th century to the mid-20th century. Technological advances in the 19th century dropped the cost of printing and made reproducing pictures much easier, leading to an explosion of illustrated, paper ephemera including prints, books, magazines, and cards. The first American paper doll commercially produced as a children’s toy was Boston-based J. Belcher’s “The History and Adventures of Little Henry” in 1812. The dolls accompanied a children’s book and were designed to act out various scenes as the narratives unfolded. Paper dolls only grew in popularity over the century. Newspapers and magazines published paper dolls both as playthings and as vehicles to illustrate current fashions for girls and women. 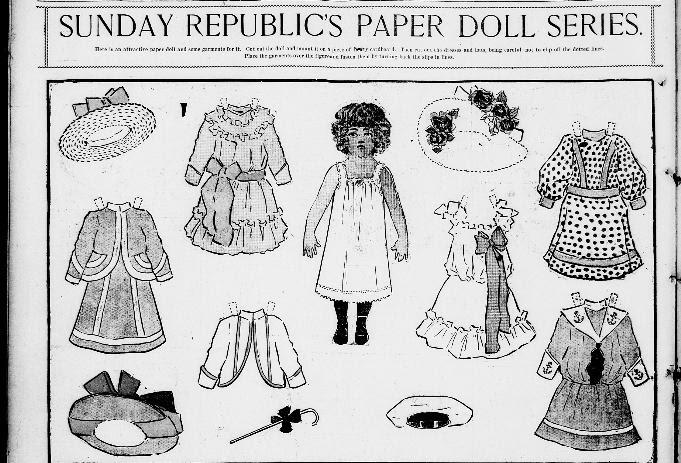 Children learn through play, using toys to try out different roles. For little girls, the appeal of paper dolls lay in their extensive wardrobes and the many different scenarios a doll could play out. The dolls and their wardrobes depicted the ideal aspirational lifestyle for their time. Dolls of older teenagers or young adult women encouraged girls to project themselves into that next phase of life. As with most playthings, paper dolls encouraged girls in fantasy role play, but the roles were defined by the dolls’ clothing and accessories. 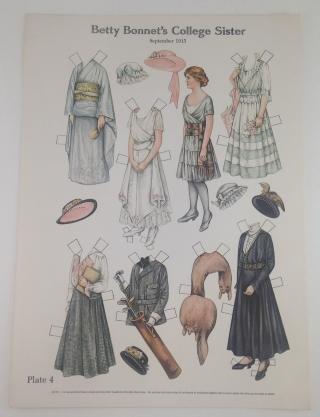 Paper dolls from different decades send a message about the role of women at the time and what society valued. Twentieth-century paper dolls’ wardrobes expanded the various potential roles for girls, from college student to movie star to World War II WAC. In this, they reflected an expanded horizon of women’s opportunities that aligned with what women were doing in real life.

Career-oriented dolls—unless that career was “movie star”—continued to be outnumbered by dolls depicting ladies of leisure. The doll below, published circa 1942, has a wide wardrobe wholly oriented towards leisure activities with outfits for day, evening, and recreation. She reflects the aspirational ideal of a 1940’s woman’s lifestyle, even if it was not most women’s lived reality. 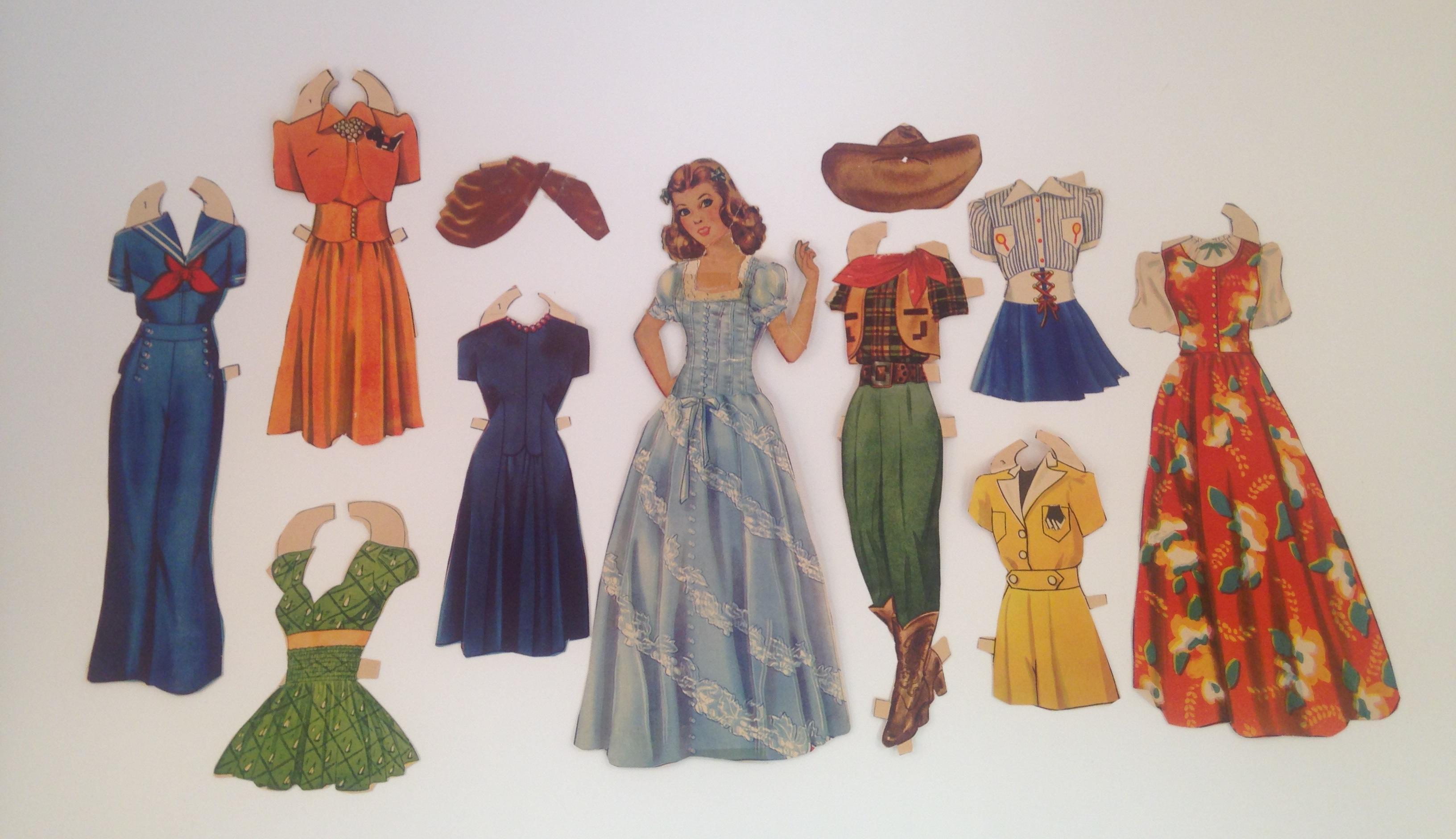 This trend in paper doll wardrobes continued until the late 1970s, after the women’s rights movement, when sets began to mix professional options among the leisure clothes, mirroring women’s increased entry into professional employment. Lydia, published in 1977, owns career wear as well as play clothes. 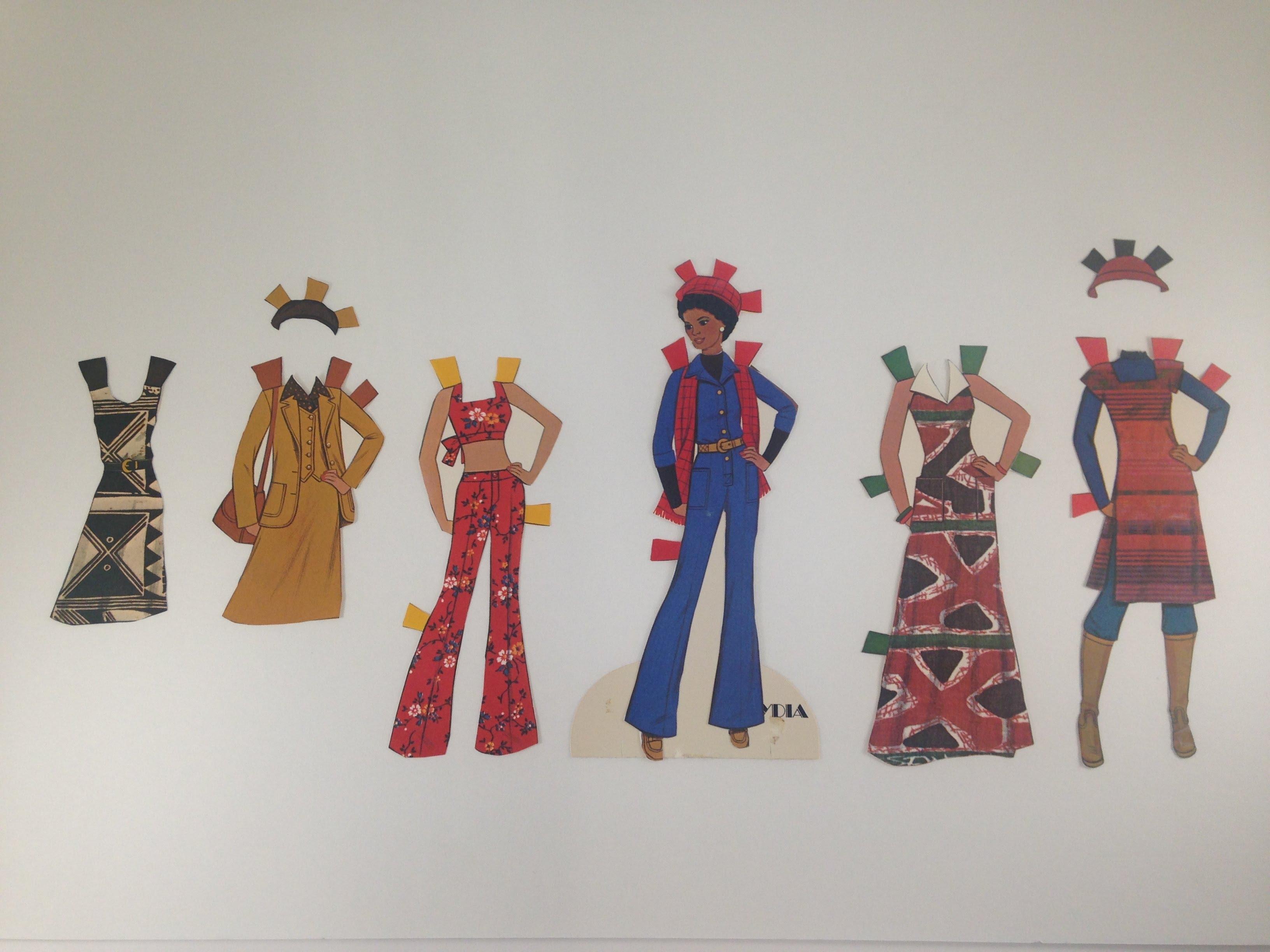 An enduring archetype was the bride paper doll. Publishers regularly released bridal party paper doll sets decade by decade, positioning marriage as an important adult milestone and a goal in and of itself. So important was the role of “bride” that some sets neglected to include grooms. Bridal paper doll outfits codified wedding pageantry, using fashion to engage girls in the fantasy while enabling them to playact the cultural role of “bride”. These two paper dolls sets, published 30 years apart in 1949 and 1978, show that the fashion elements of a dream wedding remained remarkably consistent over time. 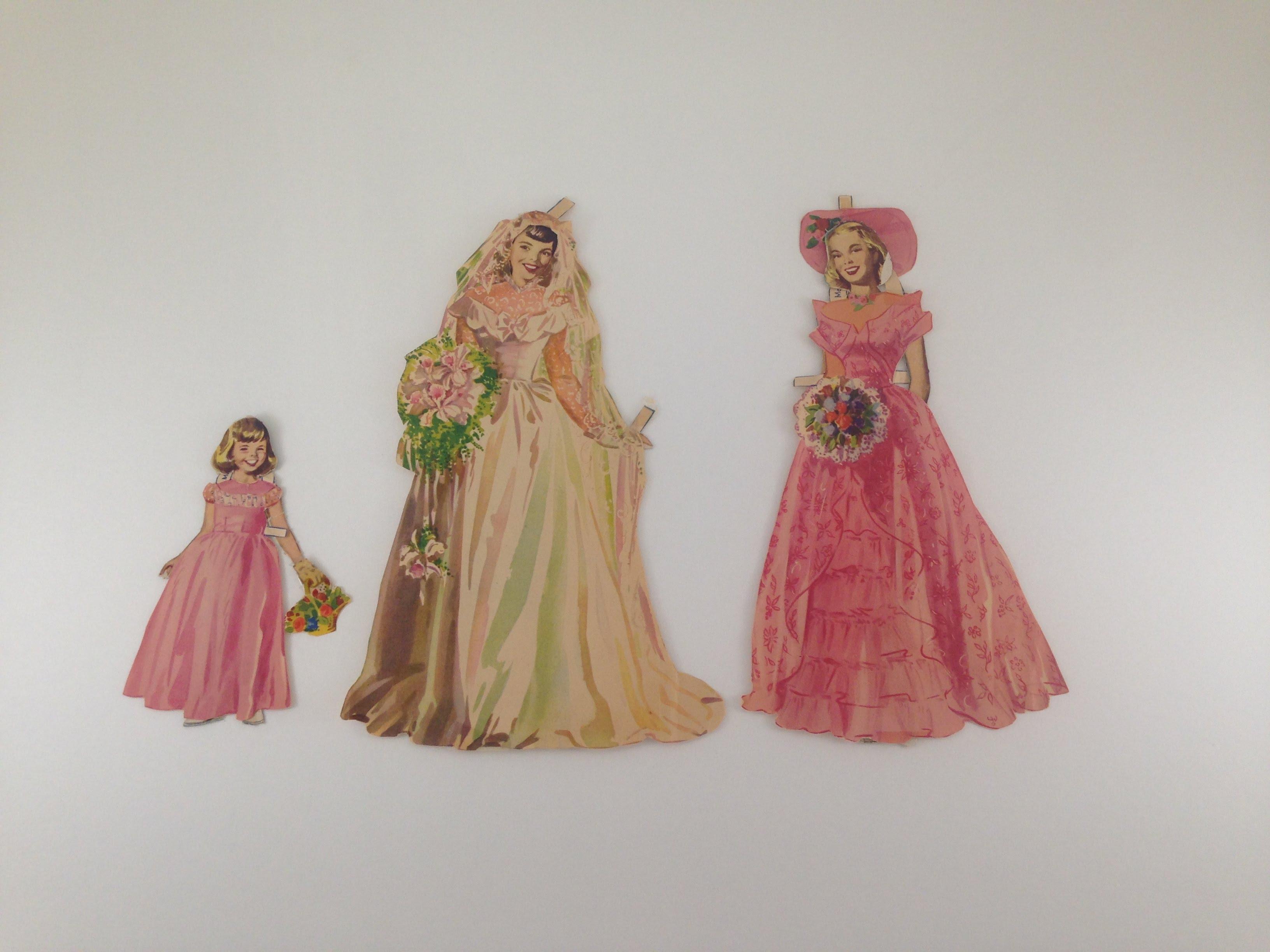 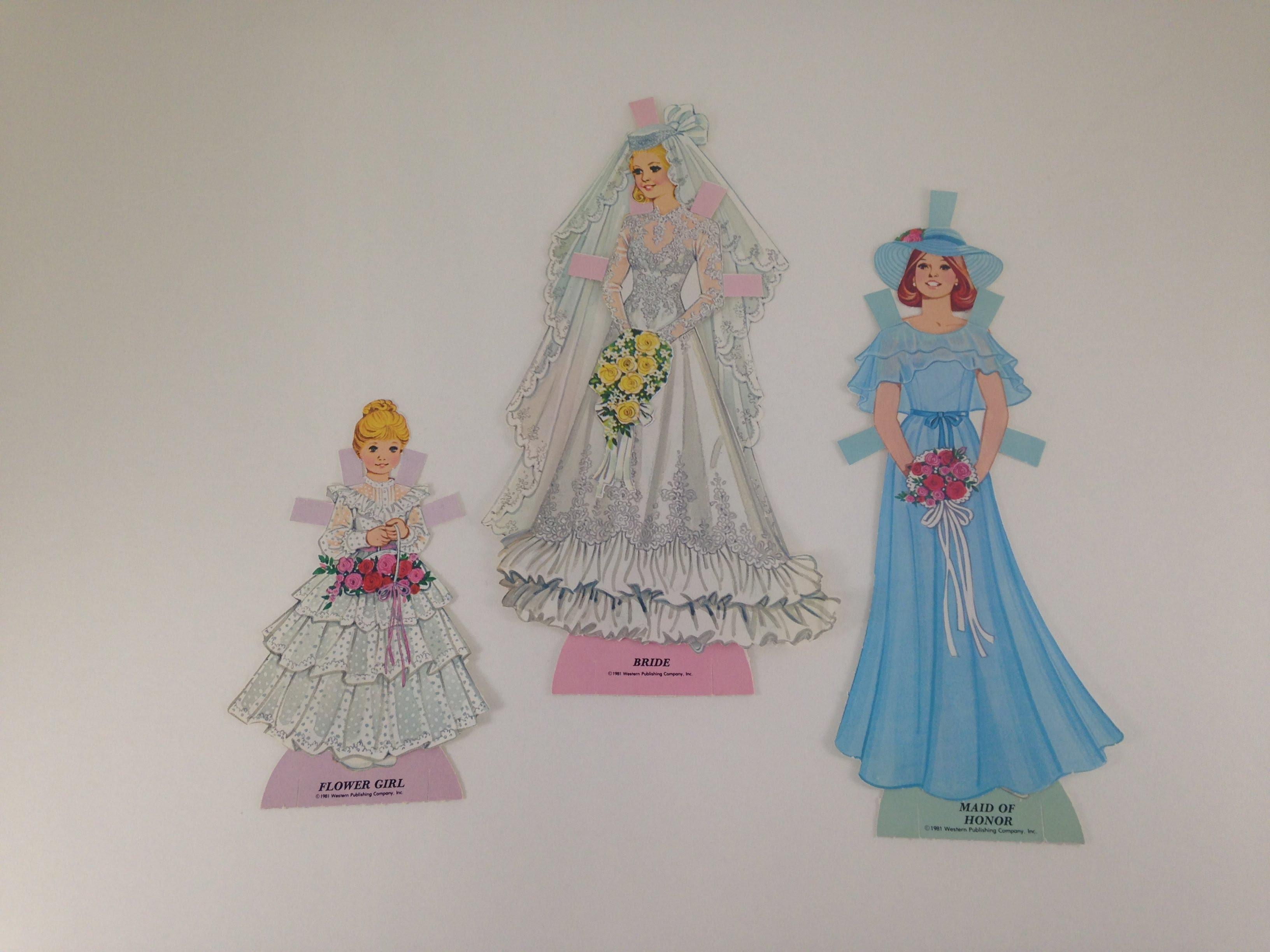 The Rise and Fall of Paper Dolls

Advances in color lithography in the last quarter of the 19th century resulted in hundreds of sets of dolls with colorfully printed wardrobes. These sets remain popular today among collectors both for their beautiful designs and the nostalgia. Paper dolls declined in popularity in the 1960s and 70s, and some blame Mattel’s Barbie. With her fashionable wardrobe, Barbie fulfilled much of the same fantasy play role as paper dolls. Paper dolls’ heyday endured over one hundred years. Today, those dolls and their fashionable paper wardrobes, reflecting the attitudes and assumptions about women’s social roles, tell us a lot in the present about how the popular culture of fashion defined women.

Ella Fitzgerald, known as “The First Lady of Song,” was a revolutionary American jazz singer who performed all over the world.
READ MORE
.