Billie Jean King and the Battle of the Sexes

This May marks the 40th anniversary of the original Battle of the Sexes tennis match between Bobby Riggs and one of the top female tennis players in the game at the time: Margaret Court. Today, many people are not aware that Riggs played another woman before Billie Jean King, but he did.

In 1973, Riggs, a 55-year-old former tennis champion and self-proclaimed “tennis hustler,” believed he could make money off challenging a female tennis player at the top of her game to a match. Riggs regularly made bets and used gimmicks in challenging other players, such as adding chairs as obstacles and targets to his side of the court and holding a dog on a leash while playing. He began making comments in the media along the lines of, “girls play a nice game of tennis…for girls” and “we’re going to put those women right back where they belong, like they used to be…around the house. They were home builders. They didn’t try go out and get the man’s job away from them. And now when they can’t even do it half as good, they still want the same money.” Riggs first challenged King, the other top female player at the time, to be the woman to take him on. King declined, so Court stepped up to the plate. Riggs and Court faced off on Mother’s Day, 1973 in a match that received a moderate amount of publicity and fanfare. Court’s nerves apparently got the best of her during the match, and she ended up losing quite badly. After his victory over Court, Bobby Riggs found himself on the covers of Time and Sports Illustrated magazines.

Billie Jean King was a well-known tennis great when Riggs first challenged her, having won many tournaments and receiving many awards and accolades. In the early 1970s, she began playing on the newly established Virginia Slims tour, the first professional women’s tennis tour. In its early years, the Virginia Slims tour struggled to receive support in the world of tennis. When Court lost to Riggs, King felt she needed to redeem women’s tennis and do something to keep the  tour alive so she accepted Riggs’ $100,000 challenge. 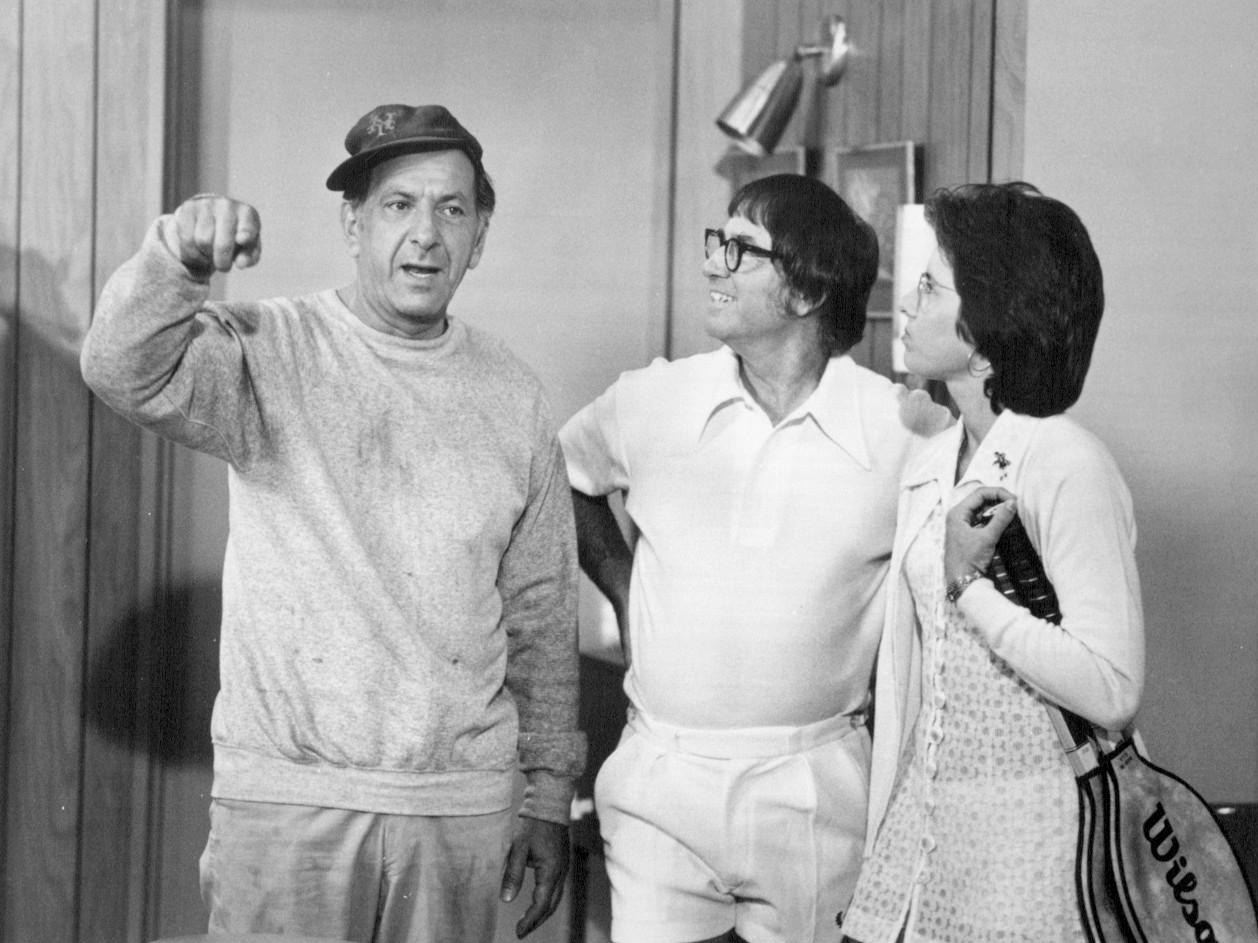 Bobby Riggs and Billie Jean King with Jack Klugman on an episode of The Odd Couple. October 30, 1973.

After a media circus that included press conferences and a 60 Minutes promotional appearance by Riggs, the pair faced off at the Astrodome in Houston, Texas on September 20, 1973. Unlike the Riggs vs Court match, this match drew in over 50 million television viewers in the United States alone. The atmosphere inside the Astrodome, filled with over 30,000 people, started out much like a circus as well. King was carried onto the court like Cleopatra by the male track team of Rice University. Riggs entered the court in a rickshaw pulled by models he called “Bobby’s Bosom Buddies.” Riggs wore a warm-up jacket that said, “Sugar Daddy.” King gave him a baby pig, much like the one drawn on his shirt on the Time cover, to represent his chauvinistic views. Once the match got underway, though, the circus-like air died down. King won the first set and received a standing ovation from the women in the Astrodome. Howard Cosell, who was leading the commentary of the match, stated that many women watching at home must have done the same. King won the next two sets to beat Riggs in the best of five sets match with 6-4, 6-3, and 6-3 final scores.

The significance of King win over Riggs went beyond the single match they played on that September night. Signed into law the year before, Title IX provided more opportunities for women in sports, however, the men of sports were not always open to letting women into their arena. King proved that a woman could play a sport at the same professional level as a man, and even beat him at his own game – women’s tennis was decided in best of three sets matches, while men’s tennis and the match King played against Riggs were decided on the best out of five sets. Billie Jean King has since become a proponent of Title IX and its importance to female athletes in the United States.

Alice Coachman was the first Black woman from any country to win an Olympic gold medal.
READ MORE
.